Best of the Chicago Music Scene 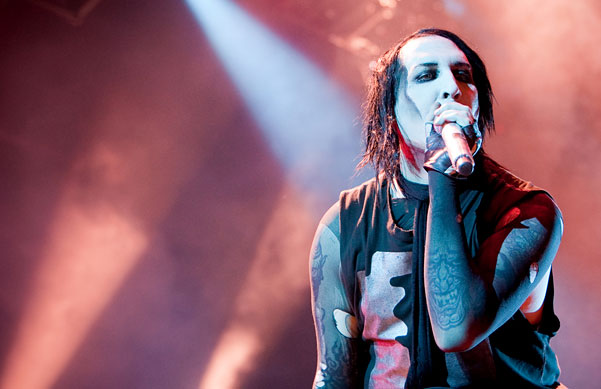 "I'm going to be honest," says SPIN's Chicago-based photographer Tasha Schalk, who took all the Windy City photos in this gallery, "Manson wasn't that great. It was my first time shooting him, though, so maybe he's usually better."

"I'm going to be honest," says SPIN's Chicago-based photographer Tasha Schalk, who took all the Windy City photos in this gallery, "Manson wasn't that great. It was my first time shooting him, though, so maybe he's usually better." 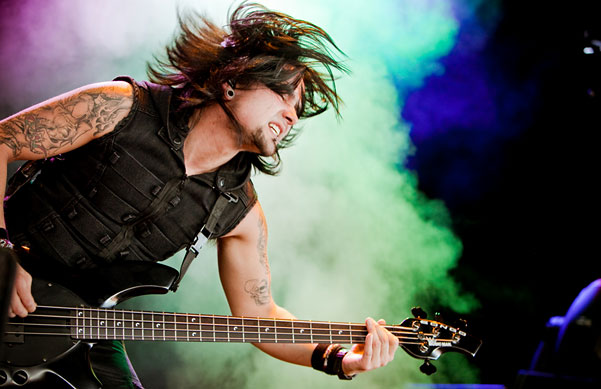 Our photographer was lucky to get this shot of the veteran Welsh metal outfit. "I was only allowed to shoot the band for the first three songs of their set," explains Schalk. "And they didn't really do much initially. I was worried I wasn't going to get anything good. Then, right at the end of the third song, the lights and the smoke started to kick in." 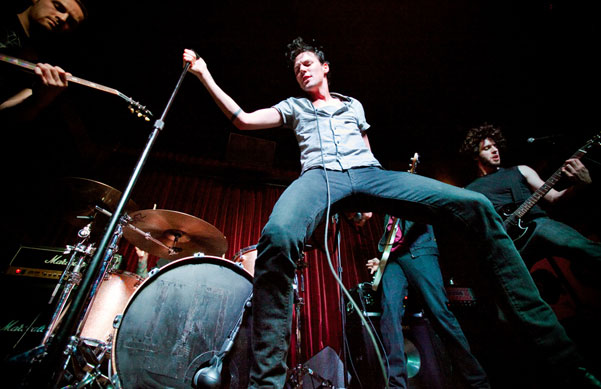 "This was Cavalry's third or fourth show ever," says Schalk about the Chicago rockers. "The singer is this guy Colin Patrick, who used to play in another local band called White Hot Knife. He called me up and asked me to shoot them. It was all very rock'n'roll." Not least because of the bar's owner: Fall Out Boy's Pete Wentz. "He's definitely a presence in the city. He pops up at shows from time to time." 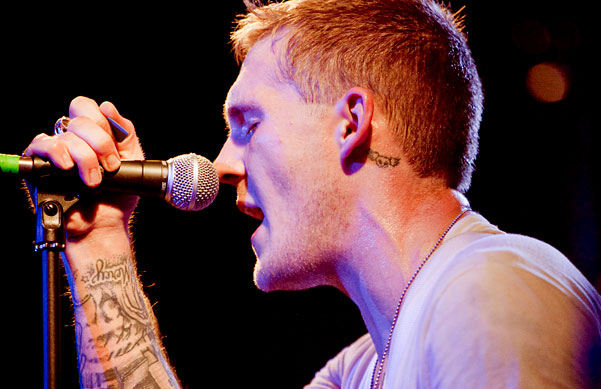 To get this shot, taken at a Lollapalooza after party, Schalk just had to get her foot in the door. "It was so hot and crowded in the club that my lens kept fogging up. But there's a doorway off to the side of the stage where you can shoot. That's where I took this photo from." The band had no such escape hatch. "I felt bad for them having to play in that heat." 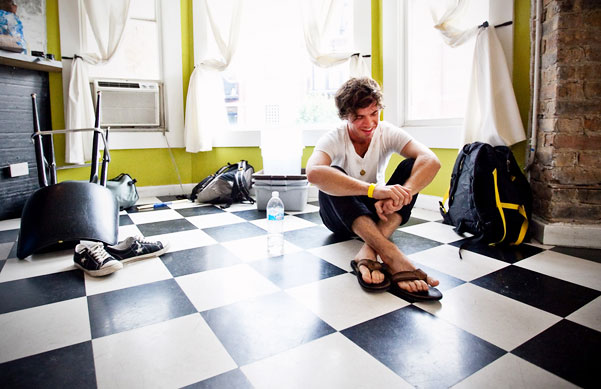 "That's in the [Chicago club] Beat Kitchen's green room," says Schalk. "I was up there with a different band and Scott Salmon from Cavashawn -- another local band -- was just hanging out. It's funny because the dudes in Cavashawn always dress in black and white. So the floor tiles kind of matched the band's vibe." 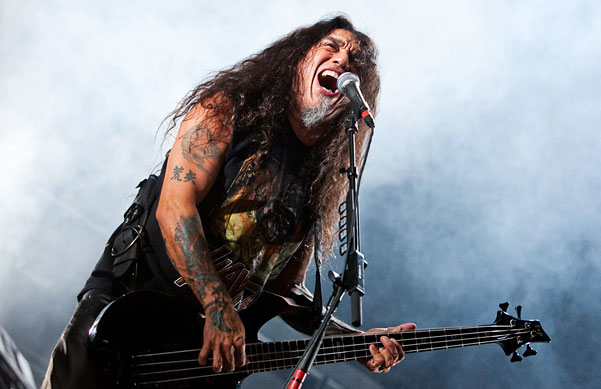 Second on the bill after Marilyn Manson, legendary thrash metal maniacs Slayer outdid the headliner. "They definitely upstaged Manson. They were great. They were epic. They were Slayer!" 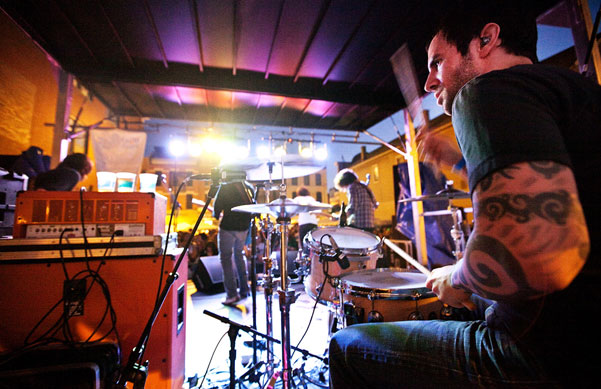 For this shot of local pop-punk band, taken at an outdoor neighborhood festival, Schalk drew on some personal connections. "Most bands don't let photographers hang around behind the stage, but I've known the Treaty of Paris guys for years. They let me pretty much have free reign. They actually get antsy if they think I'm not shooting them enough during the show."

9.The High Life, Angels and Kings 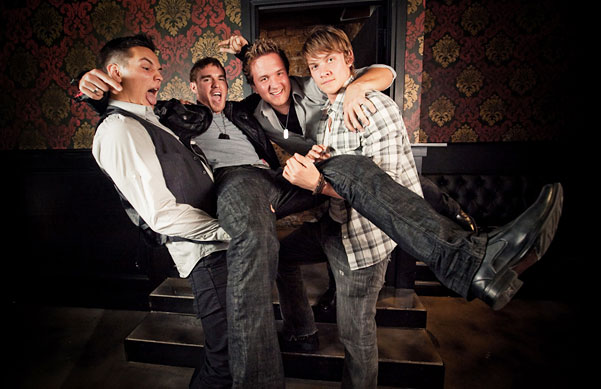 "This is a staged promo taken before the band's show that night. It's actually one of the last shots of the day. The band was super tired. I told them to just go crazy and Adam [Derza, drummer] jumped into the other guys arms."

10.Outside the Beat Kitchen 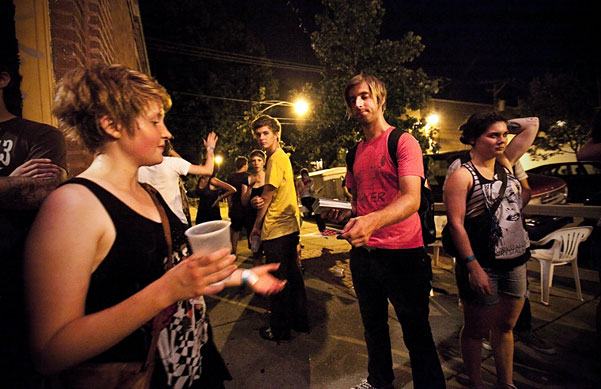 According to Schalk, "Flyering and promoting is such a huge part of the Chicago scene. It feels like you can't walk out of any show without being handed eighteen fliers. The guy in the red shirt handing stuff out in this photo plays in a band called State and Madison. Sometimes you'll see his whole band passing out fliers after a show." 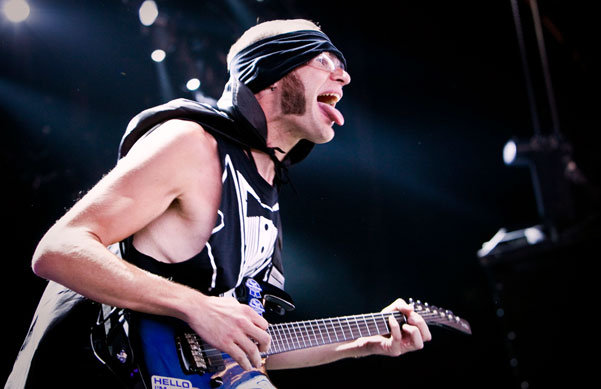 The long-running Massachusetts metal five-piece was Schalk's "Favorite band at Mayhem. During one song, [singer Howard Jones] grabbed a photographer's camera and was taking pictures from the stage. And the guitarist was making faces like this the whole time. It was great." 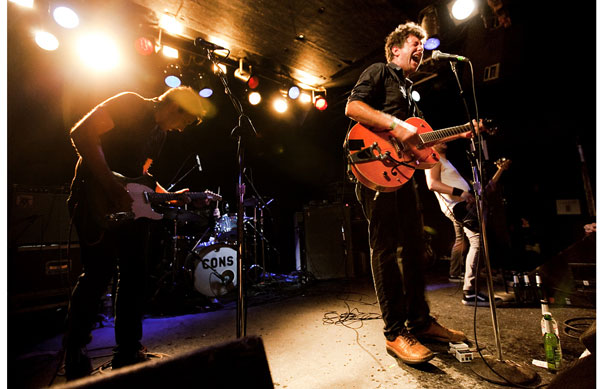 The Canadian post-punk band was opening for Gaslight Anthem. "Most of the crowd was definitely there for Gaslight, but these guys were really passionate and emotional. The singer especially was fun to shoot." 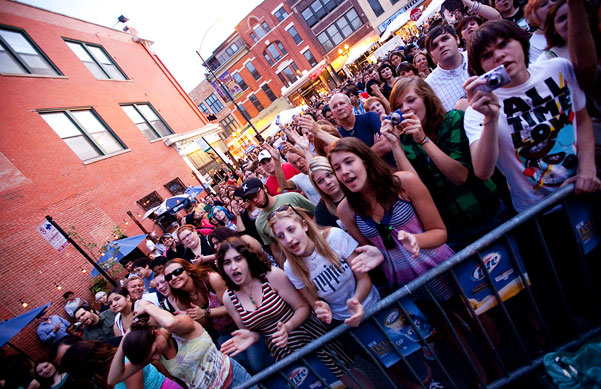 "This was taken during Treaty of Paris's set," explains Schalk. "It's sort of the opposite shot of the one I took from behind the stage. Here I was standing in front of the stage and the singer was directly above me. To get the higher angle I just held my arm up and Hail Mary'd it. It worked out!" 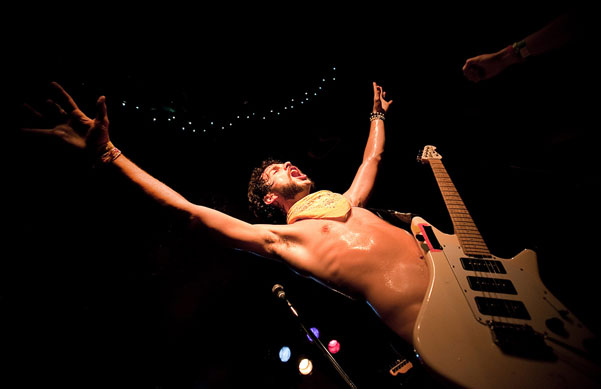 This Chicago jam band, named after a character from The Watchmen, was celebrating the release of it's new Jam Dreams on the night Schalk caught up with it. "This was an insane show," she says. "I was being pushed up against to the stage to the point where I couldn't breath. The fans were going crazy." And in case you're wondering, "Yeah, it doesn't look like it, but the guitar player was wearing pants. He wasn't completely naked."