3 Things We Learned from Beck About Will Ferrell

In an interview with the chameleonic rocker, the superstar funnyman reveals some semi-serious tidbits about his life. 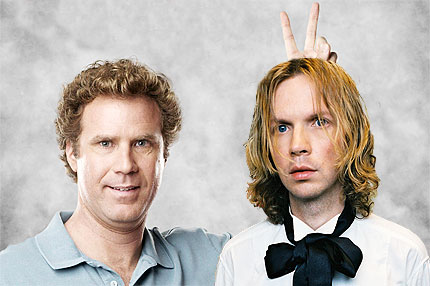 In addition to covering classic albums, Beck has been spending time lately chatting with his famous friends as part of his Irrelevant Topics interview series. A few weeks ago, he got Tom Waits on the horn. Today, Will Ferrell is on the hot seat — and he revealed some, shall we say, unique information about himself. Below, we’ve excerpted three humorously revealing parts of the conversation. Take them with a grain of goofy salt.

You can read the entire Q&A here, at Beck’s website.

1. In Which Will Ferrell Admits He’d Rather Have Fewer Children
Ferrell: How many [kids] do you have?
Beck: I have two. How about you?
Ferrell: Yeah, we have two.
Beck: You have two as well?
Ferrell: We’ve two, and uh… I don’t like it.
Beck: You don’t like it?
Ferrell: I don’t like it one bit. It’s too much time to have to deal with them. With just their needs, you know?

2. In Which Will Ferrell Auditions for Cirque du Soleil
Ferrell: I actually auditioned for Cirque du Soleil at one point.
Beck: You did?
Ferrell: I’m just having a memory. Because they were doing the current version of whatever the current traveling show is down at the South Coast Plaza in Orange County and that’s when I was living back at home in Irvine post-college days and they had an open call for clowns and mimes (laughs) which I had no experience in but I thought “Let’s just get in there and see what happens” and they already had the big tent set up and then I can’t even remember what? They had people go up in groups and pretend to kind of do whatever they thought they should do but I never got a callback so… oh well.

3. In Which Will Ferrell Tires of the Word “Fantastic”
Ferrell: Umm… I, well, I’m tapering back “fantastic” cause I think I overused it too much.
Beck: Yeah.
Ferrell: “I’m Fantastic.”
Beck: (laughs)
Ferrell: And then later I realized, “No, I’m not. I’m not bad, but I don’t know if I’m fantastic.”
Beck: It loses its luster if you overuse it.
Ferrell: Yeah, it’s like too many exclamation points in emails. I do that a lot too.