The She & Him songstress teams with her (500) Days of Summer co-star and puts a silly twist on Sid and Nancy. 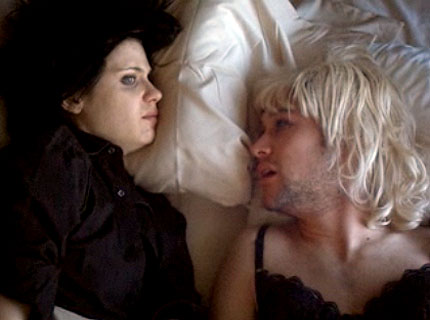 Zooey Deschanel and Joseph Gordon-Levitt — stars of the upcoming film (500) Days of Summer (out July 17) — are possibly the two actors least likely to play a pair of drugged-up, brawling punk rockers. But in this new video, they pull it off surprisingly well (and humorously), taking a scene from (500) Days of Summer and giving it a bloody, chaotic Sid and Nancy twist.

Deschanel — one-half of She & Him, alongside M. Ward — plays a dead-on Sid Vicious with spiked black hair, a crude British accent, and expletives galore. But it’s Gordon-Levitt who steals the show as Nancy Spungen, wearing a platinum blonde wig and five o’clock shadow and crying hysterically as Sid tries to leave him, er, her. Lying in bed after a violent fight (yep, involving knives), Sid tries to end the relationship, saying, “This can’t come as a total surprise to you. I mean, we’ve been like Tom and Summer for months now.” Tom and Summer, of course, are Deschanel and Gordon-Levitt’s characters in (500) Days of Summer — how witty!

The video is part of a new Web series called Cinemash, which allows various actors and musicians to mash up their favorite movie scenes. Deschanel and Gordon-Levitt’s take on Sid and Nancy is the first installment in the series, but keep watching: Common and Christopher Mintz-Plasse are doing Training Day, the stars of Reno 911! and Human Giant are interpreting Point Break (with music from Shudder to Think frontman Craig Wedren), and Cheech and Chong, Knocked UP’s Charlyne Yi, and Heroes heartthrob Milo Ventimiglia also have Cinemash videos in the works.