Rivers Cuomo and Co. air a pair of unreleased jams at a Korean rock fest. Check out video here! 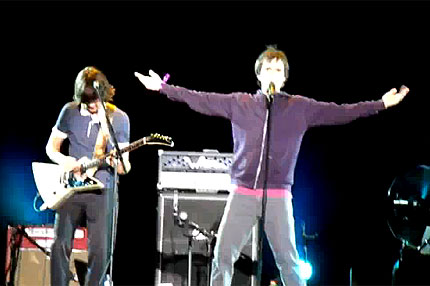 Fans of “El Scorcho,” from Weezer’s benchmark 1996 album Pinkerton, know that Rivers Cuomo has a thing for Japanese ladies — but maybe he digs South Koreans too? Sunday night at the Jisan Rock festival outside of Seoul, Weezer debuted two new songs!

The first, “I’m Your Daddy,” is a straightforward blast of power-pop, as Cuomo sings about an unexpected romantic hook-up over crunching guitar and a no-frills drum pattern. It’s a fun, if bloodless song — more “Pork and Beans” than “Say It Ain’t So” — but it’s fun to watch Cuomo sans guitar, awkwardly and endearingly executing some frontman moves. Paul Stanley he is not. And thank goodness for that.

“The Girl Got Hot” is the better of the two new numbers. The lyrics are about that most vexing of young women — the junior high wallflower who ends up turning into a hottie. Even better is the music: A stomping, almost martial, beat and gloriously strutting guitars provide the glammy framework for a buoyant sock-hop melody. Expect this one to wriggle inside your brain once the band’s currently untitled new album comes out — whenever that is.

Weezer, “The Girl Got Hot”