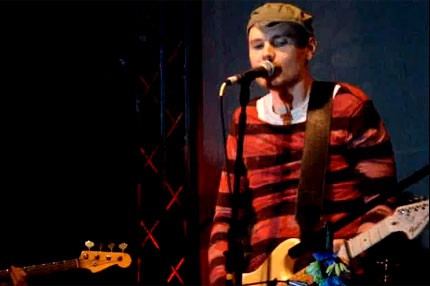 A Billy Corgan-fronted group called Spirits in the Sky performed a new Smashing Pumpkins song at a tribute concert for psych-rock pioneer Sky “Sunlight” Saxon in Los Angeles on Sunday.

Corgan was joined onstage by new Smashing Pumpkins drummer Mike Byrne, a 19-year-old freshman at the Berklee College of Music, who replaced original drummer Jimmy Chamberlain when he left the band in March. Spirits in the Sky also included Electric Prune bassist Mark Tulin and Strawberry Alarm Clock keyboardist Mark Weitz.The song, given the working title “Freak,” was written by Corgan in memory of Saxon, the lead singer of ’60s garage rock band The Seeds, who died unexpectedly in June.

“Sky Saxon came into our lives, and our lives have never been the same,” Corgan said while introducing the track. The two collaborated on a song called “Choose to Choose Love” shortly before Saxon’s death, which Corgan later released via Facebook.

After Sunday’s performance, Corgan wrote on his Twitter that the tribute show was one of his “proudest days as a human being.” “We gave him a mighty send-off to be happy now in God’s arms,” he said.

Check out the video of the performance below!