The sisters' sixth record will be called Sainthood, and drops Oct. 27. Click here to watch their iChat video announcement! 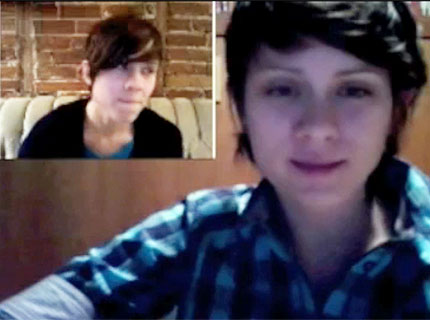 Twin sister recording duo Tegan and Sara are self-proclaimed narcissists, so it was hardly a shock that they chose to announce the title of their sixth album, Sainthood (out Oct. 27), with a self-made video — loaded with plenty of their trademark sisterly banter.

Sara finally gets serious, and reveals the album title — Sainthood — but, as is the case whenever these two speak in public, the smack talk begins. “It sounds like you’re saying ‘Thainthood,'” Tegan interjects, much to Sara’s apparent chagrin.

As with the duo’s excellent 2007 album, The Con, Death Cab for Cutie guitarist Chris Walla is producing, but this time he’s sharing those duties with Howard Redekopp, who engineered Tegan and Sara’s 2004 album, So Jealous.

And while the sisters played two gigs earlier this month, including an opening spot for Death Cab at the Hollywood Bowl, no new music from Sainthood has been unveiled thus far.