Thom Yorke, Kings of Leon for Next ‘Twilight’ Soundtrack?

The Radiohead frontman and the Southern rockers are in talks with director Chris Weitz to record music for New Moon! 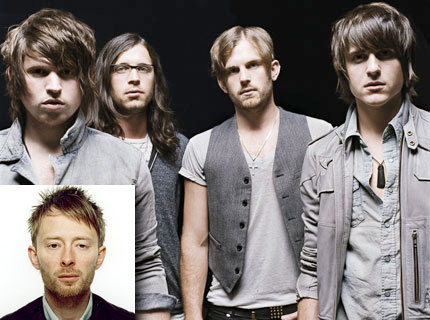 Paramore may be totally over vampire blockbuster Twilight, but Radiohead mastermind Thom Yorke and Kings of Leon certainly are not — both are in talks to record new music for the soundtrack to the next Twilight film, New Moon!

“I’m surprised at some of the bands that have said they’re interested,” director Chris Weitz told Rotten Tomatoes. “The criterion will still always be what’s right for the movie at that given moment, but Thom Yorke is interested; we might, if we’re very lucky, get Kings of Leon to do something… it’s exciting to be able to have access to this kind of talent.”

Weitz said that most of the music in New Moon will be “completely new.” Oscar-nominated composer Alexandre Desplat (The Curious Case of Benjamin Button) is scoring the film, and while “Bella’s Lullaby,” a song written by blood-thirsty heartthrob Robert Pattinson for the first Twilight will probably reappear, it will be a much different version of the song.

If Yorke’s music does, in fact, appear in the movie, it won’t be the first time — Radiohead’s song “15 Step” was played during the final credits of the first movie, but the song wasn’t included on its chart-topping original soundtrack.