Get the lowdown on Saturday's sets by Built to Spill, Japandroids, Future of the Left, the Raveonettes, and more. 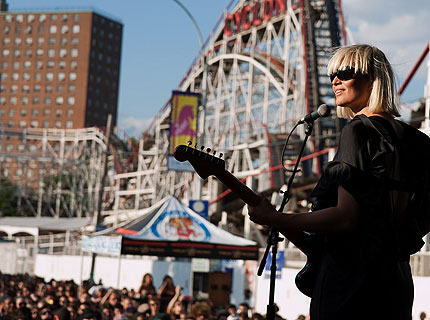 Coney Island, a sprawl of antiquated amusement park rides and fried food on the South coast of Brooklyn, is home to the Village Voice’s annual free Siren Festival, which took place on Saturday. Performers on the fest’s two stages had to compete with the 50 cent freak show, hot dog eating contests, and the Cyclone, an ancient wooden rollercoaster that appears to be one loose rivet away from deadly disaster. The sideshow was like a gauntlet testing the mettle of each band that played.

British newcomers Micachu and the Shapes deserve some credit: For a band known for using toy instruments, they can sure make an unholy racket. But Saturday that noise never turned into a particularly engaging show. Mica Levi and her two compatriots seemed uncertain onstage, and their songs, which rely on rhythmic grooves, faltered or fell apart entirely.

Brooklyn’s own Bear Hands held their own much better. The quartet’s music, a percussive brand of Les Savy Fav-y funk-punk, is fun, but the most entertaining moment of the set came when the band’s college buddies, the novelty rap duo Das Racist, took the stage and stumbled drunkenly through their hit “Combination Pizza Hut and Taco Bell” over the guitar part from Jay-Z’s “D.O.A.”

The day’s first unqualified triumph was Japandroids. The Vancouver power-duo sound like No Age, if No Age worshipped Archers of Loaf rather than My Bloody Valentine. They tore through most of the tracks off their breakout album, Post-Nothing, pausing occasionally to marvel at the scale of their venue. “I don’t even know what to do with all this space up here” guitarist Brian King said. “We should get some dancers,” suggested drummer David Prowse.King elected instead to “rock the fuck out,” hopping furiously around the stage, flipping his sweaty mop of hair, and bashing his guitar with a drum stick.

Toward the end of the set, the band dedicated one of their best songs, “Young Hearts Spark Fire,” to the audience for choosing to see the band instead of jumping on the Cyclone. “I would have ridden the roller coaster,” said King. In that case, he would have missed out on the festival’s best set.

Future of the Left are a trio of angry Welshmen with an acerbic sense of humor. While Andy Falkous’s guitar was far too quiet, which would be fatal for most punk maulers, these are some unconventional punks, and he frequently switched over to keyboard. Consequently many of set’s highlights were keyboard-driven jams like “Manchasm” and “Land of My Formers.” The best songs off this year’s instant-classic Travels With Myself And Another — “Arming Eritrea,” “Chin Music,” and “You Need Satan More Than He Needs You” — hit hard, despite the too-low sound mix.

Falkous riffed about Coney Island, complimenting America’s nacho cheese and saying of the freak show, “In Britain we also have a place with women with the bodies of snakes. We call it Manchester.” In a final display of his exuberant performance art, the bass player dove into the audience, crossed the VIP section still playing his bass, climbed over the barrier into the general audience, then dropped his instrument and did 30 push-ups while the crowd cheered him on. Who says punks can’t be great showmen?

The unenviable task of following Future of the Left fell to local boys A Place to Bury Strangers. While a group frequently labeled “New York’s loudest band” might seem like an appropriate act for a festival, they could not have been more out of place. APTBS’s grinding postpunk dirges are probably effective in dark crowded clubs, but singer Oliver Ackermann’s promise to “make you feel my sorrow” (delivered in the band’s single “To Fix A Gash In Your Head”) seemed hard to accept on a sunny day at the beach within view of a Ferris wheel full of happy children.

At first glance, the Raveonettes’ brand of gloom might seem more appropriate for the festival, since they pack it into concise pop songs with beach-ready melodies and boy-girl harmonies. But, as singer-guitarist Sune Rose Wagner confessed, the band members hadn’t performed much lately — they live in three different parts of the world — so they were just concentrating on getting through their songs — which, at times, seemed like awful hard work.

Later, headliners Built to Spill took 90 minutes to play 11 songs. That meant a lot jamming. Normally when guitarists noodle for a bit, fans check their watches. But Doug Martsch, Brett Netson, and Jim Roth are brilliant musicians and arrangers, and their jam sessions are like concertos, full of intricate melodies and radical harmonic and dynamic changes. On “Strange,” in particular, the guitarists veered between squalls of feedback and gorgeous, undistorted counterpoint.

Also unlike many jam bands, Built to Spill have some great pop songs underneath all the guitar heroics — and anthems like “Big Dipper” and”You Were Wrong,” made for potent sing-alongs. When Martsch’s guitar cut out in the middle of “Goin’ Against Your Mind,” the crowd belted out the chorus, while most of the band kept vamping, allowing Martsch to fix the glitch and finish the song. True, those hoping to hear tunes from upcoming album There Is No Enemy left disappointed, as did those whose favorite BTS record is 1997’s Perfect From Now On, which the band ignored. But the set was a triumph nonetheless.

In the middle of the set’s last song, “Carry the Zero,” some nearby fireworks started. It was a perfect complement to the soaring jam, closing Siren Fest ’09 with a happy union of complex sound and vibrant setting.

Rob Wohl
Tags: built to spill, Future of the Left, japandroids, siren, The Raveonettes, We Were There