Panic at the Disco: What Happened?

Two members leave the band, photos of Ryan Ross with cocaine surface -- and rumors run rampant. Get the story here! 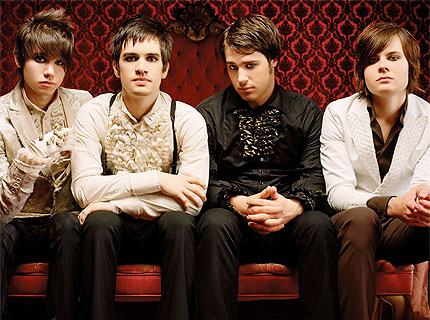 Last week, Las Vegas emo-pop band Panic at the Disco announced that two of its members — guitarist Ryan Ross and bassist Jon Walker — are quitting to pursue a new musical project together. Frontman Brendon Urie and drummer Spencer Smith, meanwhile, said they plan to continue to record and tour under the Panic at the Disco name.

The announcement left many fans stunned, and wondering why the band members decided to part ways.

And then a bombshell dropped: Photos surfaced online depicting Ross sitting on a couch, surrounded by three girls, with an empty bottle of vodka and a mound of cocaine on the table in front of him.

Ross told MTV News that the photo was taken the morning after a party at a friend’s house, and that he “didn’t even really know [the cocaine] was there.”

Before the photos leaked, Ross was touting creative differences between himself and Urie as the core issue behind his departure. “Brendon’s more of a Peter Gabriel fan, and I’m more of a Ray Davies fan,” he told MTV News.

Ross also confessed that there had been tension between him and the other bandmembers for a while. “It just got to a point when we were off tour, when we were talking about getting together and working on this stuff, that it became pretty apparent that we all weren’t wanting to go in the same direction,” he said. “There was a period where we weren’t really talking to each other all that much… We all sat down and pretty much decided that the best thing for everyone was to do what we did.”