He said Bonnaroo would be his band's last U.S. gig, but Trent Reznor has announced a final run of concerts -- in very small venues! 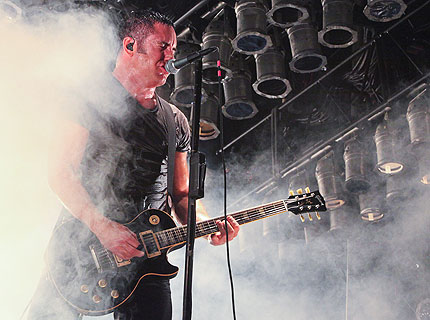 After announcing onstage that his band’s Bonnaroo set would be their final U.S. appearance ever, the musclebound Nine Inch Nails kingpin is having a change of heart. In a final “wave goodbye” tour, NIN will play a series of intimate-for-them shows at clubs and mid-sized venues in New York, Los Angeles, and Chicago in late August and September, after they swing through Asia.

“They will be informal affairs … with longer set-lists, possible special guests, cool openers, and other surprises,” Reznor wrote on his band’s official site. “Upon reflection, the NIN/[Jane’s Addiction] tour felt like we had to rush through sets due to a limited allotted set length and many shows were in daylight — it just didn’t feel right to end NIN that way.”

Reznor also announced that British punk-gazers the Horrors will support in NYC, and Danish art-rockers Mew will open select dates in all three cities.