New Jay-Z Track Vows Death to Nothing In Particular 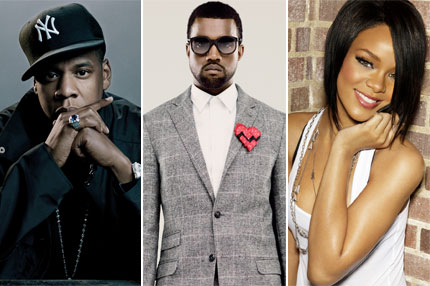 Kanye West definitely got the message: Ixnay on the Autotune-yay when rapping with Ova-hay.

For “Run This Town,” the first proper single from September’s The Blueprint 3, Jay-Z is going the all-star route, showcasing Rihanna on the hook to this midtempo guitar sample-based track.

But it’s Kanye’s verse towards the end that damn near steals the show (“What you think I rap for/ To push a fuckin’ Rav 4?”), and reminds us how he got to be Kanye in the first place.

And while the Internet-having public can weigh in on the track now, Jay-Z can get a more scientific response if he plays this during his just-announced emergency headlining set in place of Beastie Boys next Friday at All Points West.