SPIN's Charles Aaron on the band's hometown gig, and their position as hipsterdom's lampooning jesters. 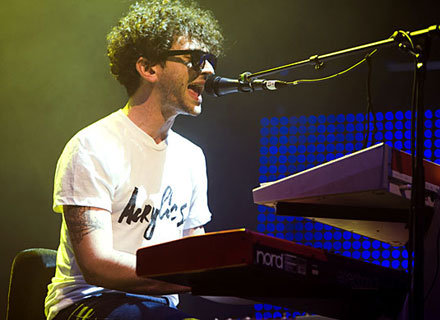 “This is your anticlimax.”

So spake a snickering Andrew VanWyngarden, as he prepared to play the final selection of MGMT’s set at Brooklyn’s Prospect Park Bandshell on Wednesday night, July 1. (See a complete photo gallery of the MGMT show here.)We’d all spent the last five minutes or so hopping and swaying and grinning and giggling and hugging and wondering if we’d hallucinated those fireworks over the trees while VanWyngarden and partner Ben Goldwasser ditched their guitar and keyboards, respectively, grabbed their mics off the stands, and led the sold-out, thousands-strong crowd in a sing-along of “Kids,” the 2008 boys-and-girls-of-summer anthem for anybody who ever invoked the word “hipster,” ironically or otherwise. They worked the stage like fresh-faced Borgata lounge vets, as the familiar synth melody echoed comfortingly.

But now that was over. Time for your anticlimax, as VanWyngarden intoned, like a deep-voiced public-address announcer introducing a local sports team’s starting lineup, “OK, please put your hands together for your Memphis Grizzlies!”

The anticlimactic song, “Congratulations,” the title track from their upcoming album, is a typically twinkly, wistful bit of ironically heartfelt MGMT mumbo-jumbo, like “Life on Mars” for a generation constantly nostalgic for an imaginary nurturing childhood, but who are now left shivering alone, with only their Twitter followers to keep them warm. Strumming firmly, he crooned: “Turned my luck into a mistress / It kept on coming back a smile / See my face with half-masked guilt / And lay down a quilt upon the lawn / Spread my arms / And soak up congratulations.” Of course, I couldn’t actually delineate anything he was saying, and I’m really just piecing together some bleary half-assed approximation, but I think the “quilt on the lawn” part is about right, and perfectly fits MGMT’s insistence on an idyllic imagery of comfort that’s both elusive and absurd and scary, but what we all obviously want.

It was also nicely fitting, since as he strummed, couples and families began rising from scattered grassy, muddy areas, folding up their blankets/quilts, and preparing for the walk or subway ride back to whatever they call “home” in this fragrant condo-hole still masquerading as New York.

It’s funny, in the same way that Pavement once gave us this feeling that the whole Nirvana/grunge/alt-rock pageant of a neglected generation boo-hooing its way to oblivion was an overblown big-duh, and that we needed to take our tenderly ironic or smart-assedly noisy pleasures where we could find them and dummy up, MGMT now plays the same role, perfectly encapsulating and commenting upon, with a knowing sigh and stoned series of haikus, an entire decade in which indie rock tilted at the mainstream’s spoils and congratulated itself for being the soft edge of monetizing hipster culture’s next phase, be it fashion or social networking or random apps. “We’re fated to pretend / Yeah Yeah Yeah.” MGMT take very seriously the art of not taking yourself very seriously, and in their wan, anthemic way, offer us a quilt, a hug, and wink.

The soundtrack of last summer feels truer than ever.

Charles Aaron
Tags: MGMT, We Were There