The alt-rock band unveil "The Fixer," a catchy tune off their September release that's equal parts grunge and the Boss! 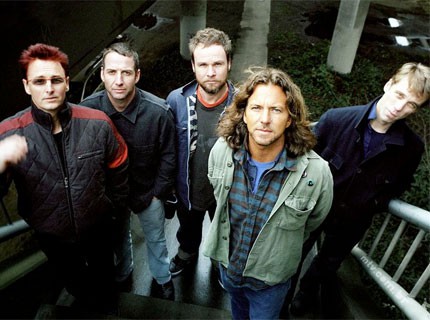 Pearl Jam released “The Fixer,” the first single from their September release, Backspacer, to radio stations and their MySpace page this morning. Listen here.

The song is a radio-friendly jam, and shows a 20-year-old band that has aged gracefully, convincingly combining Bruce Springsteen-style piano melodies and anthemic hooks with gritty electric guitars that recall the grunge pop of their 1992 tune “State of Love and Trust.” EdVed says it best in the song’s verse: “When something’s old I wanna put a bit of shine on it!”

“The Fixer” is the second song from Backspacer that fans have heard, following the band’s performance of “Get Some” on Conan O’Brien’s inaugural run as host of NBC’s Late Night. Watch here!

As you may recall, Backspacer will drop September 20 via retail chain Target. The band’s deal with Target is not exclusive; the album will also be sold through select distributors, including independent record stores and PJ’s fan clubs.

Pearl Jam will hit the road this fall in support of the new album, their ninth to date, kicking off a 10-gig run September 21 with a pair of hometown shows. Ben Harper and Relentless7 will open most concerts. Check out the complete tour schedule here.