Plus, get details on former bandmates Ryan Ross and Jon Walker's new band! 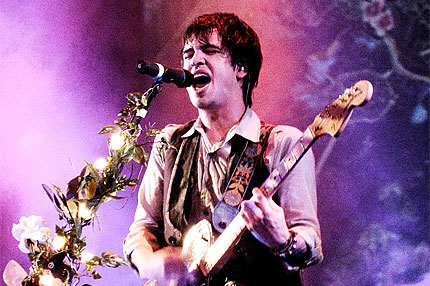 Panic at the Disco’s Brendan Urie and Spencer Smith — and departed members Ryan Ross and Jon Walker — have wasted no time moving on from the band’s recent schism.

Today, Panic at the Disco posted a new song, the aptly-titled “New Perspective,” to their MySpace page. The track, which frontman Urie performed during a recent solo acoustic show at San Diego’s Comic-Con, is the band’s first release since Ross and Walker left the Las Vegas-based emo-pop act. It will appear on the soundtrack for the upcoming Diablo Cody-penned, Megan Fox-starring horror-comedy Jennifer’s Body. Check it out here!

Meanwhile, Ross and Walker debuted their new band, the Young Veins, on MySpace today, releasing their first track, the ’60s pop-influenced “Change.” Check it out here!

A few weeks ago, Ross told MTV News that creative differences were the main reason for his and Walker’s departure. “Brendan’s more of a Peter Gabriel fan, and I’m more of a Ray Davies fan,” he said, adding that his new music will be heavily influenced by the Kinks, the Beatles, and the Beach Boys.

Urie, however, told SPIN.com that Panic’s new album won’t be much different than the first two, despite Ross and Walker’s absence.

“We’ve always been fans of pop music, rock, anything we could get our hands on, and we’ve always tried to make it our own thing,” he said. “There’s gong to be a lot of slower songs, as well as some uptempo songs you might be able to dance to. Maybe a mix between the first and second record.”