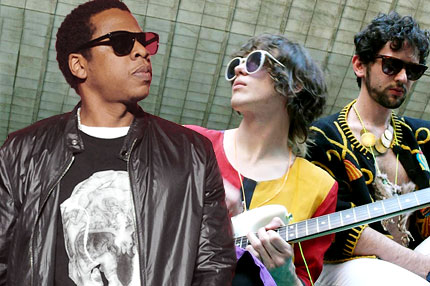 Sorry, Paul McCartney — Jay-Z beat you to a MGMT collaboration!

HOVA has enlisted fellow Brooklynites MGMT to appear on his highly anticipated new album, Blueprint 3, which drops on September 11, according to Reuters.

The psych-pop duo aren’t the only fresh faces recording with Jay: Rihanna, Drake, Kid Cudi, and Kanye West protégé Mr. Hudson will also appear on Blueprint 3. Meanwhile, West himself — along with No I.D. and Timbaland — are producing the album.

“Kanye is really the father to the next generation — he’s from the school of Q-Tip, and now Drake and Kid Cudi are from the school of ‘Ye,” Jay-Z said. “And, when you look at Kanye, you have to look at Lil Wayne. I think they’re like Kobe Bryant and LeBron James.”

So far, there are no collaborations in the works with Jay’s wife Beyonce, but the rapper born Shawn Carter hasn’t yet ruled out the possibility that the I Am… Sasha Fierce diva will show up on a song or two.

Contrary to previous reports, however, promo tracks “Jockin’ Jay-Z” and “Brooklyn Go Hard,” both released last year, will not appear on the album.