Now you can rock out at home -- Billie Joe Armstrong-style! Click here for details. 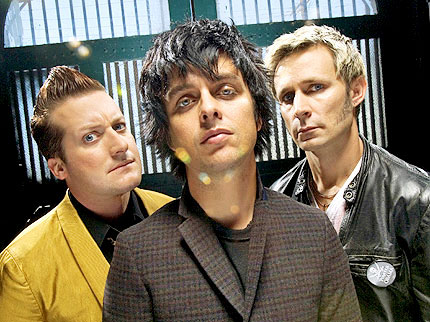 The boys of Green Day are the latest artists to jump on the Rock Band wagon. Starting today, you can rock out on your plastic instruments to three tracks from the punk trio’s latest album, 21st Century Breakdown, now available through the Rock Band music store: “Know Your Enemy,” “21 Guns,” and “East Jesus Nowhere.”

“We got approached by Rock Band and they showed us the one they did for the Beatles, and we really liked that. It made me go back and listen to my old Beatles records, you know?” Armstrong told MTV.com. “So it’s kind of archival, it’s kind of a history lesson, it goes beyond just playing a game. And it’s proven that games like that can get kids involved in music. I know my kids played it and they know songs I never thought they would ever [hear]. I’d be like, ‘Wow, where did you hear that?’ ‘Oh, ‘Rock Band.'”

So what would Green Day like to see in future versions of the game?

“I think it would be interesting to have, like, a laser gun in Rock Band, so you can shoot some aliens at the same time as rocking out,” Armstrong said.

Sounds like it’s time for Green Day to pull a N.E.R.D. and create their own video game!