The band's '70s-influenced harmonies go from sleepy to startling during a late set at D.C.'s 9:30 Club 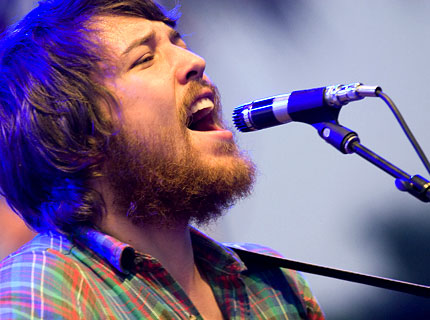 With their pitch-perfect harmonies, baroque acoustic guitar figures, and pastoral lyrics, Fleet Foxes can induce certain unintended side effects. Drowsiness, for one. Their reverb-soaked voices can either soothe, or weigh heavily on the eyelids, depending on the time of the night.

The time of night was 10:30 PM when they kicked off the second show of their tour-opening double-header Wednesday at Washington, D.C.’s 9:30 Club with “Sun Giant,” the hushed a cappella title track of their 2008 EP.

It felt a little snoozy.

But when the Foxes finally kicked into gear, about midway through the epic folk tune “Sun It Rises,” the group’s crescendo of voices hit with startling force — impressive for a bunch of guys singing “The sun, rising / Dangling there / Golden and fair in the sky.”

Focused on older material (mostly from the band’s self-titled debut), the set featured only a couple of new compositions, including “Bedouin Dress.” But they really strummed the bejeezus out of it. The quintet layered spiraling guitar over droning keyboards, creating a wall of sound so huge that, at times, frontman Robin Pecknold had to strain to overcome it.

If Fleet Foxes can’t rock you, they can definitely soft rock you.

When the din subsided, Pecknold got the stage all to himself, performing solo takes of “False Knight on the Road” and new tune “Blue Spotted Tail” on acoustic guitar. That nakedness might be scary territory for a songwriter who relies on a constant backing of “oohs” and “ahhs,” but Pecknold embraced the intimacy, crooning and bellowing at just the right moments.

Gestures like these made countless harmonizing pop acts from the Beach Boys to Seals and Crofts mega-stars decades ago. Despite two sold-out shows, Fleet Foxes represent more of a low-key, tastemaking niche, but by mastering that tradition, they can still have an impact all their own.

Aaron Leitko
Tags: Fleet Foxes, robin pecknold, We Were There