Exclusive: Wilco’s Jeff Tweedy Rocks Out with His Sons!

WATCH: The Wilco frontman and his two boys perform for SPIN cameras. 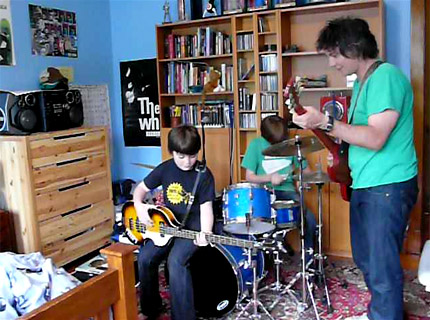 You’ve heard of The Basement Tapes, but what about The Bedroom Jam?

While SPIN’s photographer was shooting Wilco frontman Jeff Tweedy at his Chicago home for our August cover story, the rock dad took a break from posing to jam with some fellow musicians — his two sons, Sam, 9, and Spencer, 13.

If the video below is any indication, Tweedy’s sons have inherited their father’s knack for rock’n’roll. The impromptu concert took place in Spencer’s bedroom, where the avid blogger has a comforter covered in electric guitars and a giant Who poster on his wall — perfect decorations for an aspiring drummer whose pop-punk band, the Blisters, played at Lollapalooza in 2007.

Check out the Tweedys’ performance and be sure to pick up our August issue now!