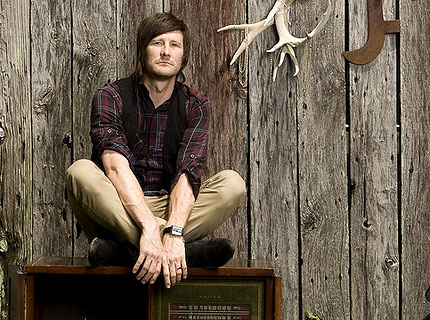 “I always joke and say this is a Christmas album,” says Stephen Christian, singer for Florida-born rock band Anberlin, of his forthcoming side project Anchor & Braille. But it’s not because Felt, out Aug. 4, is packed with covers of “Frosty the Snowman” and “Little Drummer Boy.” It’s because late-December afforded the only personal time in the constantly touring frontman’s busy schedule.

And if “Like Steps in a Dance” — available as an exclusive stream below — is any indication, this is definitely Christian’s very personal vision, a far cry from the chunky riffage and chest-thumping vocals fans have come to expect from Anberlin, whose last two albums were Billboard Top 20 debuts. On the new song, a gentle guitar strum and piano flourishes support Christian’s demure coos during the verses — before his voice soars up into a stratosphere-scraping falsetto.

“Like Steps” also possesses a literary lineage, which isn’t surprising given Christian’s penchant for books and writing; he’s a budding novelist who presented a reading at SPIN.com’s Liner Notes event last fall.

“The book that inspired the song was a novella by Paulo Coelho called Eleven Minutes,” he says. “Even though the book’s character is hard for me to relate to — she’s a South American female prostitute — the book taught me a lot about love, and what it means to grasp beyond the emotions and realize that for the most part it is a choice.”

While Christian wrote parts of the album on his own while traveling through places like Florida, Michigan, and Nebraska, he had a collaborator on the Anchor & Braille project: Aaron Marsh, of electro-popsters Copeland, co-produced the record — and the duo’s creative process mirrored, to some degree, the manner by which Death Cab for Cutie singer Ben Gibbard and digital maven Jimmy Tamborello crafted 2003’s breakout hit as the Postal Service.

“I would go into [Marsh’s] home studio and lay down scratch piano, guitar, and vocal line,” Christian explains. “After I’d head out on tour, he would fill in the skeleton and ultimately give it the production soul, and when I would return, I would find myself singing over a song with incredible musicianship.”

Stream the track for yourself, and speak up in the comments section if “Like Steps in a Dance” inspires you! You can download it via iTunes starting July 21.