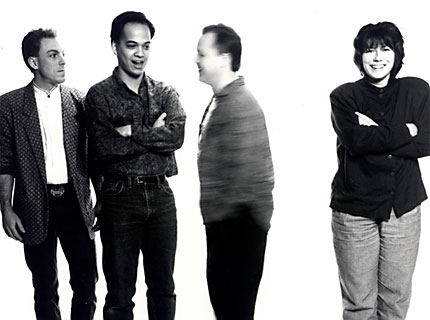 Alt-rock kingpins the Pixies will make their live return to the U.S. this fall!

“I believe we’re doing the Wang Center in Boston,” he says of his hometown gig at the 3,600-capacity venue.

Exact dates have yet to be confirmed. The U.S. tour is expected to follow a run of Doolittle shows in Europe scheduled for October.

The gigs will coincide with the release of the Pixies’ ambitious Minotaur box set, which will arrive in October on 4AD Records (order yours now via Artist in Residence).

Black notes that 2010 will mark the 20th anniversary of Bossa Nova, and didn’t dismiss the idea of performing that album’s songs back-to-back, too.

“We don’t want to get blood out of a stone or anything. It’s not like we’re seeking offers — but the phone just always rings.” One recent call was a proposal to open for Neil Young at the U.K.’s Isle of Wight festival this past June.

“You get that phone call and you go,” enthuses Black. “Neil Young? Yeah, I’ll be there; I’ll sing the old songs — sure!”