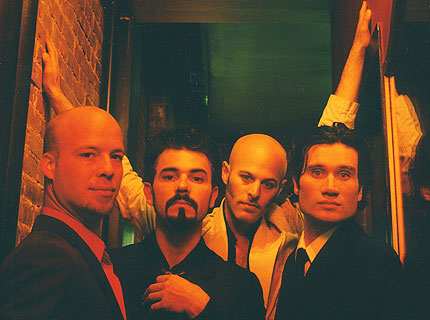 Last fall, revered post-hardcore band Shudder to Think reunited for their first tour since breaking up in 1998. If you missed the shows, don’t fret — the band recorded their gigs and compiled the best takes on Live From Home, Shudder’s new live album out Sept. 15!

One of album’s best tracks is “Hit Liquor,” a menacing rocker from their career-defining 1994 release, Pony Express Record. Over four unhinged minutes, frontman Craig Wedren tells an abstract story about a mysterious girl in mysterious circumstances.

“It all connects up in a Rubik’s Cube kind of a way,” Wedren says of the song, which was originally written in 1993 with guitarist Nathan Larson. “It’s playful, mischievous, sexual, dark, and unsettling. Is the subject dead? Or just asleep? Will she come to my woozy party? There will be kissing and licking. There’s also a Geisha-like formality to it, a seduction dance.”

He adds: “I think of ‘Hit Liquor’ as a ViewMaster reel. We supply the pictures, you supply the meaning.”

These days Wedren is staying busy writing music for TV shows, including HBO’s new series Hung. He also covered Prince’s “Baby, I’m a Star” for SPIN’s July issue tribute to the Purple One. Larson, meanwhile, performs as a member of A-Camp alongside his wife, Cardigans singer Nina Persson.