The Portland, OR, prog-folkies will play The Hazards of Love with help from Lavender Diamond and My Brightest Diamond! 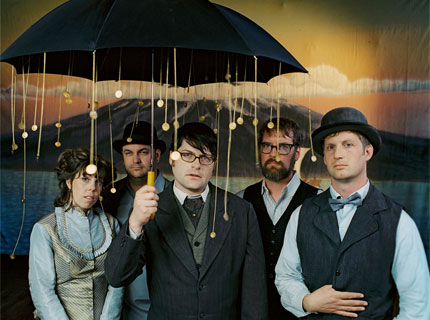 The Decemberists have added 14 shows to their U.S. tour behind The Hazards of Love, the Portland, OR, band’s latest album. The new run of gigs will kick off September 20 in Burlington, VT, and conclude in San Francisco Oct 18.

The group will continue playing the theatrical new album in its entirety. Becky Stark of Lavender Diamond and Shara Worden of My Brightest Diamond, who have tagged along for much of the Decemberists’ “A Short Fazed Hovel” tour (it’s an anagram), will reprise their roles as the female characters from the album.

Also joining the band on the road will be former Artist of the Day Laura Veirs and the Hall of Flames. Before she jumps aboard the tour, though, the Decemberists have a set of summer dates to finish, including a non-Hazards show at the Newport Folk Festival to be broadcast on NPR. Our Bonnaroo favs Heartless Bastards open the August shows.