The indie wizzes and the 50-piece L.A. Philharmonic battle sound issues at the Hollywood Bowl. Click here for a review! 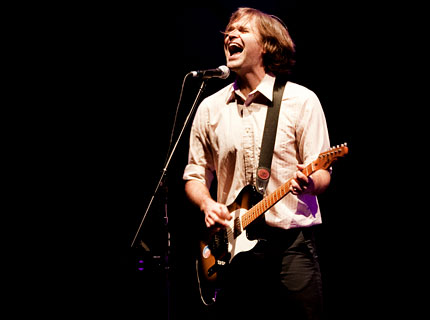 It was right after a rousing version of “The Sound of Settling” from 2003’s Transatlanticism, 12 songs into Death Cab For Cutie’s sold-out concert at the Hollywood Bowl, that frontman Ben Gibbard made the big announcement:

Even for the Grammy-nominated Seattle quartet, this was a big deal: Fourth of July weekend; a capacity crowd; a gorgeous night under the stars at a historic venue; and one of the finest symphony orchestras in the country, the Los Angeles Philharmonic, on hand to perform backup. And if that weren’t enough… fireworks!

Opening the show some two hours earlier with a short set of feel-good power-pop, A.C. Newman of the New Pornographers summed it all up in his opening address to the crowd: “First of all, holy shit!”

Next on the bill, Tegan and Sara entertained the audience as much with their between-song banter as with new wave-tinged hits like “Walking with a Ghost” and “Back in Your Head.” But even after facetiously outing their mother as a fellow lesbian for “getting fresh” with a Marilyn Monroe look-a-like working Hollywood Boulevard, the twin sisters’ jokes kept coming back to how nervous they were playing the Bowl and how impressed they were with the beautiful people in the VIP area at the foot of the giant stage.

“So how much did you pay for your ticket?” Tegan asked a patron in the front row. “Seriously, we wondered about it earlier when someone pulled out a wad of $100 bills.”

Without a doubt, expectations were high for Death Cab’s show. And when the foursome took the stage as night fell, they turned it all into kinetic energy — particularly Gibbard. Whipping his Fender Telecaster guitar from side to side on “Marching Bands of Manhattan” from 2005’s Plans, he looked as though he might actually give himself a case of whiplash. Gibbard probably could have powered his own amp if he’d been hooked up to a turbine, but he didn’t let his fitful routine affect the music, which sounded as strong as ever.

With lead guitarist Chris Walla and bassist Nick Harmer trading off the middle section’s thick riffs, “Crooked Teeth” was twice the song it is on Plans. Thanks to Jason McGerr’s muscular drumbeat propelling it forward, Narrow Stairs’ “I Will Possess Your Heart” was a slowly coalescing whirlwind of unrequited love. And “Cath…” — which Gibbard dedicated to Tegan and Sara — illustrated the perfect counterpoint of a well-crafted pop song with Gibbard’s shout-to-whisper lyrics and Walla’s crunchy-to-twinkling guitar work.

So when Gibbard returned to the stage from that quick break — solo except for the aforementioned 50-piece orchestra — the audience was primed for something special. But what it got on the acoustic guitar ballad “I Will Follow You into the Dark” was altogether, well, unpolished.

Perhaps playing it a little faster than he’d rehearsed it with the Philharmonic, Gibbard started the song at one tempo and the orchestra another. Gibbard offered conductor David Campbell (Beck’s father) a get-out-of-jail-free card by slowing down just slightly as the time difference became apparent. But Campbell kept marching to the beat of his own baton and his players continued to drag — like a Kung Fu movie with badly dubbed dialogue.

With the rest of Death Cab soon taking the stage and joining in, the tempo issues were eventually worked out. Faith was restored when the whole ensemble stuck the sudden landing at the end of “Title and Registration.” And by the time they got to the grand finale of “Transatlanticism,” Death Cab and the Philharmonic were perfect together — even the fireworks were in synch.

Still, looking back, “Follow You Into the Dark” was a bit of a head-scratcher. Here was an orchestra reinforcing the very stereotype that this kind of rock-hybrid show was designed to shatter: one of classical musicians being crotchety old foggies, who play it like the sheet music tells ‘em to, while turning a deaf ear and a blind eye to what’s happening just out of sight of the maestro.

Liam Gowing
Tags: We Were There