Courtney Love to Eric Erlandson: “Hole Is MY Band!”

The alt-rock queen fires back at her former axeman, who told SPIN.com, "There is no Hole without me." 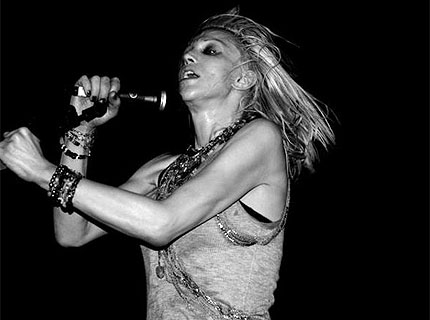 This morning, Love posted a rant on Twitter (see below) aimed at Erlandson, in response to his comments to SPIN.com last week, which lambasted Love’s plans to release a new album under the Hole name without him and possibly without bassist Melissa Auf Der Maur. “The way I look at it, there is no Hole without me,” said the Zen-practicing axeman.

Love, of course, didn’t take too kindly to that. “Hole is MY Band MY name and MY Tradmark [sic],” she posted, also making reference to credit card bills that Erlandson might have run up, among other various accusations.

Read her complete diatribe below:

Meanwhile, Love also posted to Twitter what could be the new Hole album’s cover art — a very Edgar Allan Poe-esque raven. Maybe she’s sending a message to Erlandson: “Hole is yours… nevermore!”