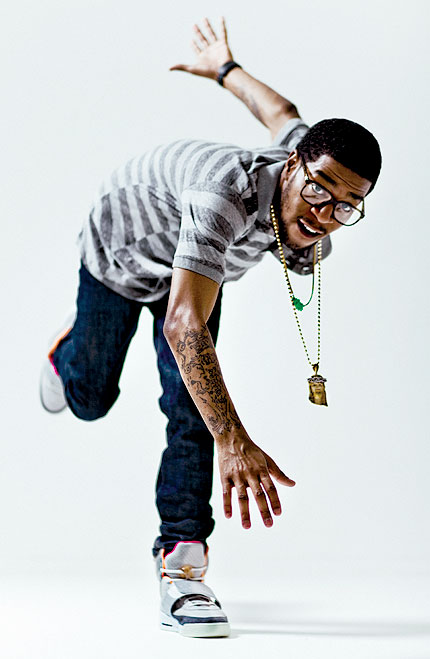 Though not a Christian rapper, Kid Cudi found Jesus in a Virgin Megastore. “I was looking at CDs, saw the gleam of a Jesus piece in the right side of my eye, looked up, and it was Kanye West,” says the rapper, who decided this was divine intervention on behalf of his recording career. Mustering all his folksy Midwestern charm, he introduced himself and offered up his music. West politely balked, yet Cudi (born Scott Mescudi 25 years ago) persisted. “I said, ‘We’ll be working together one day soon.’ “

Last summer, three years after thatencounter, Cudi’s prediction came true when West summoned him to Hawaii to work on 808s & Heartbreak. West had been impressed by Cudi’s debut single, “Day ‘N’ Nite”-a dreamy tale about a lonely stoner seeking (what else?) enlightenment-which Cudi had released on the indie hip-hop label Fools Gold. Cudi ended up cowriting four songs on Heartbreak, including the singles “Paranoid” and “Heartless,” and singing on two. West also signed him to his label, G.O.O.D. Music. “It was a relief when I met Kanye,” Cudi says, “because I had nothing to go back to.”

But then a funny thing happened: “Day ‘N’ Nite” became a hit, cracking the Billboard Hot 100 this past December (eventually peaking at No. 3). “I believed in it,” says Cudi. “Sometimes you get caught up in the next record. You need to slow down and think about what you just made.” The fame that came with it, though, was a lot for the Cleveland-bred Cudi to handle, and in March he announced his retirement on his website, only to recant it a few days later. “I did the Carson Daly show, and when I walked onstage, the kids were like, ‘Don’t retire, Cudi!’ Fuck, they want to hear what I have to say.”

Having recently toured with Asher Roth, this month Cudi will release his debut album, Man on the Moon: The End of Day (G.O.O.D./Universal Motown), which features Snoop Dogg, West, and the electronica duo Ratatat. And now Cudi has a healthier way of dealing with the attention: “I try not to think about that,” he says. “All I can do is make a phenomenal album so the hype turns into fact.”