The Hostel writer/director and costar of Quentin Tarantino's Inglourious Basterds on the soundtrack to his life. 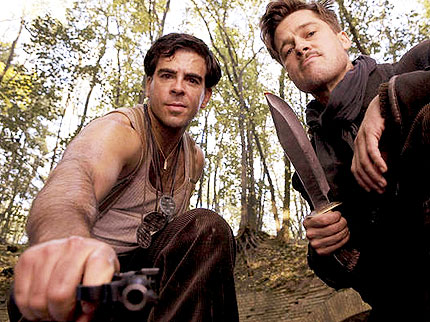 What music were you obsessed with in high school?
Iron Maiden. When I was 13, I silk-screened an Iron Maiden Eddie on the back of my Repo Man and Clockwork Orange T-shirts. Even though I was really fat, I avoided getting beat up because the tough kids would pass me their jean jackets and be like, “Do Eddie from Number of the Beast.”

What did you listen to in preparation for your scenes in Inglourious Basterds?
Right before the scene where I beat a guy to death with a baseball bat, I listened to Miley Cyrus. My girlfriend put that on my iPod as a joke, and I was so mortified that the other guys might find it that I just started going crazy. “Nobody’s Perfect” became my psych-up-to-kill song.

What’s the last album you bought on somebody’s recommendation?
Brad Pitt mentioned Kings of Leon on set, so of course everyone went out and bought every Kings of Leon album. I liked Aha Shake Heartbreak.

Who comes after Wilco on your iPod?
I stopped listening to Wilco because an ex-girlfriend gave me an album of theirs, but I still have them on here. Next is William Shatner. Then [guitarist-banjoist] Willie Ames. Then Wu-Tang.

Name an album that is guaranteed to get you laid.
Serge Gainsbourg’s Histoire de Melody Nelson. It’s French. If you can’t get laid with Serge Gainsbourg, then you have no business getting laid.

Give me a playlist on your iPod.
I have a “Shower Mix” that I use as my clock when I’m getting ready. I don’t want to have to worry about watching the time, so if I have five minutes to shave and I’ve already heard [Paul Simon’s] “Late in the Evening,” then I know I’m late.

Is there a song that you consider torture to listen to?
[Beyoncé’s] “Single Ladies” makes me want to throw up.

What was the last song that made you cry?
I was at Quentin’s house around New Year’s, and we got stoned and played Paul Zaza’s “The Ballad of Harry Warden” [from the 1981 film My Bloody Valentine] about 30 times. It conjured up this period of innocence and childhood, when the only thing in our existence was watching horror movies. We got teary-eyed.