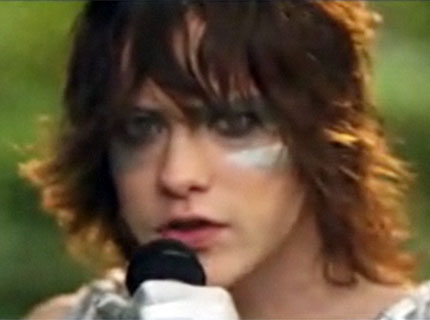 MGMT’s new music video for their now ubiquitous tune “Kids” features an adorable little boy and a crew of monsters — it’s basically the Where the Wild Things Are equivalent of psych-pop videos. Watch below.

The mini-masterpiece (directed over the past year by band pal Ray Tintori) stars an adorable tyke who suffers from an “I See Monsters Everywhere” syndrome.

He is in the process of fleeing from some zombie types when he encounters MGMT in a grassy knoll, jamming in trippy silver space suits. The little guy may be freaked, but he’s clearly an MGMT fan, and the band hooks him up with some headband merch. Sweet!

A zombie policeman eventually reunites the little ankle-biter with his glamorous, designer bag-toting mom and it’s back to his car seat for some must-see TV: a trippy puppet show replete with kaleidoscopic effects.