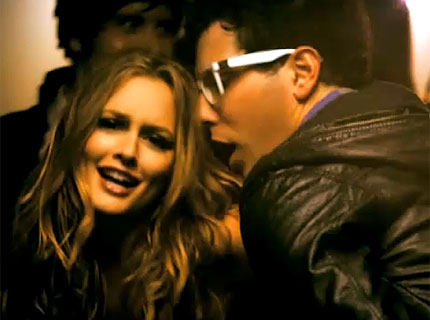 Flashy outfits, booze, gambling, and Leighton Meester back-stabbing via text message — it’s the recipe for a juicy episode of Gossip Girl. But this youthful debauchery isn’t on Mondays at the CW — it’s actually the plot for the music video for Cobra Starship’s new song, “Good Girls Go Bad,” featuring vocals by Meester!

In the video, Meester — who plays queen bitch Blair Waldorf on the hit show — runs a speakeasy casino beneath an unassuming deli operated by the boys of Cobra Starship. In order to get in, you have to order the right sandwich — and once you’re in, anything goes.

The infectious, dance-y “Good Girls Go Bad” soundtracks it all, but Cobra Starship seem to have the wrong idea about who’s in charge at this party. Though frontman Gabe Saporta sings, “I make them good girls go bad” and “You heard that I was trouble / But you couldn’t resist,” it seems Meester is the corrupting one. In the end, when the cops arrive, Saporta and his sandwich-slinging friends get busted while Meester runs off in her mile-high red heels.

This won’t be the last time we hear Meester sing — she’s currently recording her debut album, due sometime this fall. Meanwhile, Cobra Starship will release their third album, Hot Mess, on August 11.

Watch the video below. Then tell us what you think in the comments section.