The epic, eight-minute clip sees the pop diva tossed from a balcony and thrown in jail! 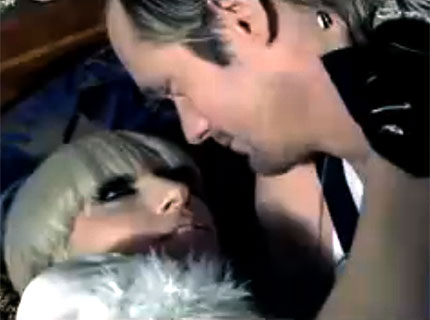 Whether you love Lady GaGa, or want to see her get pushed off a balcony, the pop star’s music video for her new single “Paparazzi” has something for everyone.

Directed by Jonas Äkerlund (whose has collaborated with the likes of Madonna and Prodigy), the new clip sees GaGa as a sort of Princess Diana-meets-Madonna figure: The eight-minute video follows a murderous plotline in which GaGa plays a tortured (but savvy) starlet who, though relentlessly preyed upon by photogs, has the last media laugh.

It opens with a steamy sequence in which Gaga and her beau, played by actor Alexander Skarsgård (a.k.a. tragic Orange Mocha Frappuccino enthusiast Meekus from Zoolander), are seen getting it on in the bedroom a luxe mansion. Skarsgård relocates the pair’s frisky antics to the balcony so he can position his unsuspecting victim for paparazzi shots. GaGa catches on, hits him over the head with a champagne bottle, and is promptly shoved from the mansion’s balcony, where those paps keep on snapping.

She’s down, but she’s not out: Cut to GaGa in a diamond-embellished neck brace and wheelchair — then sporting a pair of dance-move-friendly crutches with matching metallic bustier and headpiece.

And later Gaga gets her revenge; in one of her trademark, barely-there ensembles, our heroine poisons her boyfriend with a white powder hidden in her ring!

The lesson here? Murder makes you even more famous, accessories make an outfit, and maybe those cameramen aren’t so bad after all — the video closes with a triumphant GaGa celebrating her own comeback by posing for the lens.