Hot rods! Knife fights! Young love! The Vegas band's clip for "A Dustland Fairytale" is a dramatic slice of the 1950s heartland. 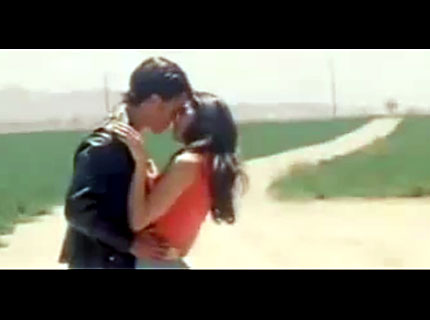 The Killers want you to know that they’re as American as roadside diners, apple pie, greasers, ’57 Chevys, bobby-pinned Brendas in party dresses, and good ol’ fashion knife fights — which is why the Vegas foursome packaged ‘em all together in their grand new music video for Day and Age gem “A Dustland Fairytale.” Watch below.

The five-minute music video is more of a short film. It’s like the boys’ take on Grease… but with a sentimental twist: Footage of a grizzled old man returning to his childhood stomping ground is spliced with flashbacks from his roaring and troubled past — engaging in hot rod races, smooching his sweetheart, and gettin’ tough in a knife fight… which ends in an unforgettable tragedy.

And of course, there’s Mr. Brandon Flowers injecting a little drama of his own: “He’s some kind of slick chrome American prince / It’s a blue jean serenade / Cinderella in a party dress / I saw the devil wrapping up his hands / He’s getting ready for the showdown,” he sings.

Watch out, Green Day: The Killers’ “Fairytale” drama is custom fit for the Broadway stage, too. But wait! Who will fill in for Marlon Brando and play the role of the dreamy tough guy?

Watch the video below. Then cast the role in the comments section.