The art-rockers run with wolves and tend to a llama in their clip for "Stillness is the Move." 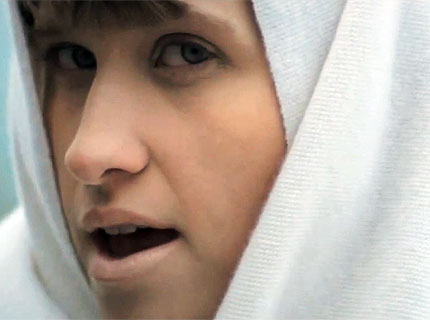 Brooklyn art rockers the Dirty Projectors have released a video for R&B-inflected Bitte Orca track “Stillness Is the Move.” And unlike Jay-Z’s new video, this one is light on Harvey Keitel appearances, but the Matthew Lessner-directed clip does feature wolves and a llama.

Those familiar with the band’s reputation for innovation would surely expect something that defies run-of-the-mill-ness, and they’d be right.

Outfitted in powder blue jumpsuits and hooded by shawls, lead vocalist Amber Coffman and DP bandmates Angel Deradoorian and Haley Dekle fashion themselves as a sort of girl group for the Druid set, breaking from emphatic shoulder-shaking to run with the wolves. They also let their hoods down for a synchronized dance routine that looks a bit like the cast of Chicago’s reinterpretation of the Electric Slide.

Overall, it’s ever-so-Ladyhawke in tone. And not this Ladyhawke , but rather, this one.

Meanwhile, DP leader Dave Longstreth takes on the role of wandering minstrel-cum-llama herder — initially standing on a rotating platform on a mountaintop before exploring the wooded landscape. That’s pretty much all he does, but really, it’s more than most do in the span of a day, never mind a music video.