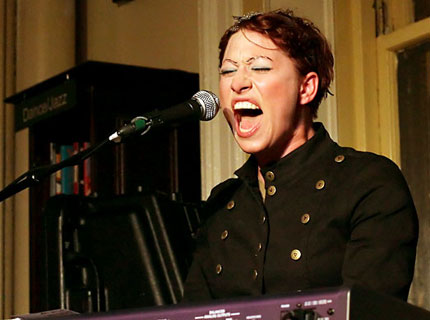 Below are four video clips of Palmer and Gaiman’s performance:

3) Neil Gaiman, “Feminine Endings”
Gaiman reads a macabre new story about a man who works as a living statue — and ends up stalking a young woman he has never met. Coincidentally, as Gaiman explains in the clip, Palmer once worked as a human statue in Boston’s Harvard Square.

4) Amanda Palmer and Neil Gaiman, “I Google You”
The Dresden Doll taps the keyboard on this comic torch song about Googling a lover. She wrote the chords, he wrote the lyrics.