The rapper dedicates his (unintentionally?) hilarious new clip to the ladies! 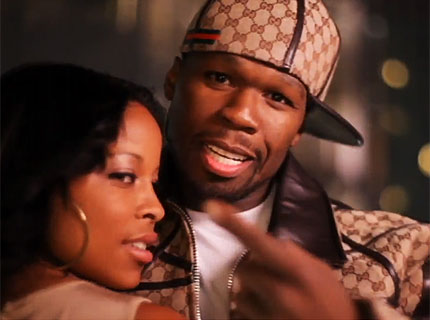 Either 50 Cent has been secretly collaborating with the Flight of the Conchords team, or he’s just been hording his “master of satire” abilities until now.

Regardless, the video for “I Do A Lot For You,” off his just-released War Angel mixtape, is hilarious in an earnest, slow-jam-rap-meets-comedy-track kind of way.

Clad head-to-toe in Gucci and backed by a two-man entourage that is equally label-whored to the hilt, Em and Dre’s third amigo dedicates the song “to the bitches” before demonstrating his sweet-talking powers of seduction.

Fiddy opens by attempting to shed his gangsta image, revealing a sensitive side. “You can change me baby, you change me,” he says. Awww! But how can we refrain from chuckling at this next lyric: “Aw shit, I’m already not the same, see?”

The rapper delivers his message from what appears to be the rooftop of a swanky city penthouse, periodically flanked by ladies who looked plucked straight from Eddie Murphy’s Boomerang.

“I’ll do anything for you,” he promises sweetly, but then undermines the sentiment with ill-advised come-ons: “I do a lot bitch!” and “You should be in fucking love with me!” Wow.