Kim, Thurston, Lee & Co. celebrate the launch of The Eternal in the land of the iPod. 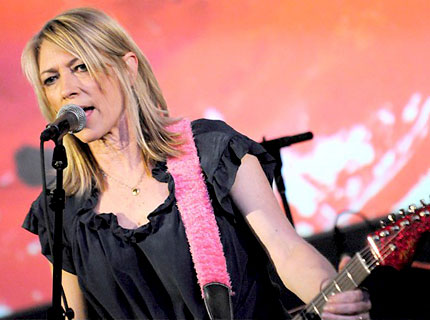 To mark the release of their 16th album, The Eternal, indie-rock godfathers Sonic Youth performed Tuesday night at the one venue with even more pop-culture clout than their own: an Apple Store in lower Manhattan’s SoHo neighborhood. The show was being filmed for iTunes’ “Live from SoHo” series.

Most of the folks who squeezed into Apple’s performance space, which looked more like a millionaire’s basement entertainment center than a rock venue, were members of the media or friends of the band. This was as much a press conference as a rock show. Still, this was Sonic Youth — 56-year-old Kim Gordon wearing a dark blue dress that swayed just below her knees as she strummed a Fender Jazzmaster 10 feet from the crowd.

The quintet (including bassist Mark Ibold) ripped into “Sacred Trickster” — the two-minute firecracker that launches The Eternal. And except for the brief encore (Daydream Nation’s “Hey Joni”), SY stuck to the new record. There was the Bowery punk of “No Way,” the cutting beauty of “Calming the Snake” (a tune that recalls Evol and Sister’s noisier moments), and the hummable, riff-heavy, “What We Know” — one of two Eternal tracks from guitarist Lee Renaldo.

Sonic Youth have certainly played more animated shows, and to more animated crowds. “It’s so quiet,” Gordon noted at one point. “One would think this was a temple to technology.” Even so, the band rocked with their unmistakable mix of abandon and acumen.

The Apple Store’s sound, despite low expectations, proved phenomenal. And guitarist Thurston Moore, 50, still looked the precocious teenager with his long bangs, baggy jeans, and white Chucks. Plus, it was Gordon and Moore’s 25th wedding anniversary, so there was plenty to celebrate besides the new album.

Nearly 30 years into their career, Sonic Youth have yet to lose sight of what made the band so revolutionary, and so much fun. “Heaven’s not about your reputation.” Renaldo sang last night. No, it’s about your guitar tone.

John Macdonald
Tags: We Were There