From Liverpool to Shea Stadium, watch the Fab Four rock out in the official trailer for the upcoming video game! 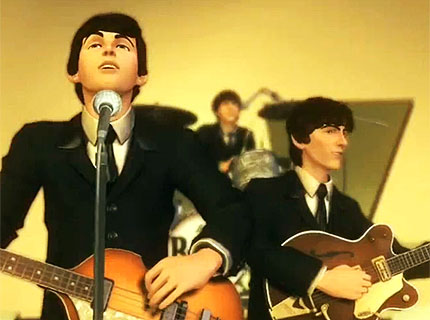 The Beatles: Rock Band hits store shelves September 9 — and if its official trailer is any indication, gamers and music fans alike are in store for the ultimate Beatles experience. Damn, the graphics are so good you can even see John Lennon sneak a joint during the tension-filled Let It Be sessions in 1970. Okay, maybe not. But, seriously, the picture quality is top-notch.

The teaser for The Beatles: Rock Band also reveals some of the classic Beatles tunes included in the game, including “Day Tripper,” “I Am the Walrus,” and “Here Comes the Sun.” It walks through the Fab Four’s career in high-resolution quality, from Liverpool’s Cavern Club to New York ballpark Shea Stadium, where the Beatles performed to a crowd of 55,600 in 1965.And the game’s designers did a pretty good job replicating each members’ distinctive facial features, too, from their early mop-top ‘dos to Paul McCartney’s Let It Be-era beard. John even appears to get skinnier as the years pass by. Now that’s historical detail!

Watch the trailer and peep some of the songs featured in the game below.