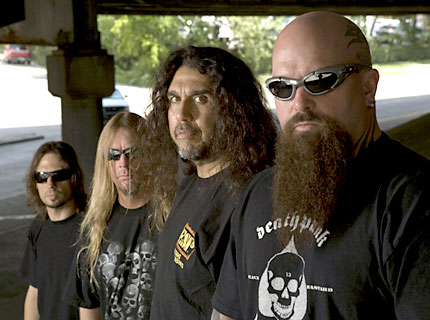 As the follow-up to 2006’s Christ Illusion, the new album was recorded in Los Angeles with producer Greg Fidelman, who has previously worked with Metallica, Slipknot, and the (International) Noise Conspiracy.

Last fall SPIN.com joined Slayer in the studio and filmed the guys recording the new album. Watch our footage here.

Guitarist Kerry King told Billboard.com that the album is different than any they’ve recorded in the past. For one thing, King and fellow guitarist Jeff Hanneman both contributed equally to the writing process.

King also said that World Painted Blood is the first album the band has composed in the studio — usually, the boys come in with songs already prepared, but this time, they wrote while they recorded. “I was kind of thinking, ‘Man, this could be the first record in a long time that’s got a little bit of filler,'” he said. “But I think every song came out great.”