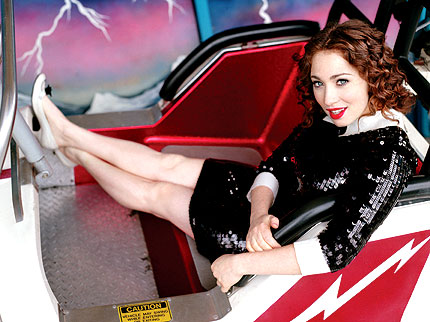 “Aaaaaaaaaaaahh! Can we change the channel?” Regina Spektor pleads, shielding her eyes from a fight scene unfolding on the motor-home TV. “This is too scary for me.” The driver, clearly miffed at the prospect of not finishing his bootleg copy of Watchmen, eyes the singer — her cherry-red lipsticked mouth cast in a girlish pout — and finally obliges, switching to…Jurassic Park.

“Are you kidding?” Spektor, 29, laughs, as a velociraptor chases Jeff Goldblum across the screen. “I’m such a sissy. I can’t even handle Animal Planet.” She pauses, shaking her head. “The world is too much.”

Today, at least, she has a point: The world outside the trailer is a gray, rainy, abandoned Coney Island. While in the summer, the place can still feel like New York City’s famed urban playground — offering working-class families weekends packed with games, rides, fire-eaters, and Nathan’s Famous hot dogs — on this dreary early May weekday, it seems like a paint-peeled and rusted set on a Hollywood lot. And Regina Spektor is seeing it for the first time — empty. There are no screaming kids tossing balls into a clown’s mouth to win a California Raisins doll, no smitten teenagers in line to make out on the Wonder Wheel, no worried parents standing at the base of the Cyclone, certain that this will be the time the ancient roller coaster’s wooden tracks break.

No, today the park is all Spektor’s, open solely for her — or rather, for SPIN to photograph her. But the weather isn’t cooperating, and so she spends the afternoon sitting in a rented motor home parked on Surf Avenue, eating soy yogurt and checking her BlackBerry for urgent messages about her new album, which she just finished mastering last night. Even when the sun breaks through, it’s accompanied by heavy drops.

For Spektor, though, this is a blessing in disguise. Because the last thing she wants to do is actually ride a roller coaster. “I can barely handle the backseat of a car,” she says, laughing. When the rain finally subsides, we venture out among the miniature airplanes, trains, and monster trucks. Though she’s not keen to climb aboard the Thunderbolt, Spektor agrees that, on paper at least, it’s a magical prospect: an amusement park all to herself. Every kid’s dream, really. But then again, Spektor wasn’t like other kids.

Six years ago, when Regina Spektor first edged into mainstream consciousness, she was defined by two simple phrases: Russian immigrant, discovered by the Strokes. But in 2006, Spektor left those tags behind with the release of Begin to Hope,an infectious, savvy collection of piano- driven pop songs that sold more than a half-million copies. Her bouncy single “Fidelity” — with its synth violins, love-sick lyrics, and her crystalline coo — was a TV music supervisor’s dream, scoring scenes on Grey’s Anatomy, Veronica Mars, and Brothers & Sisters. Listeners of Sirius’ Left of Center station voted it the song of the year, and fans watched the video on YouTube more than 200,000 times in two days. She played Letterman, Conan, and Leno, and even serenaded fashionistas at an Oscar de la Renta runway show.

So it’s easy to read into the title of her new album, Far. While Spektor says it was inspired by thoughts of outer space, about “how freaky it is that we are really out there,” it also suggests a strange journey over a remarkable distance and, maybe, into a breathtaking future.

Read the entire Regina Spektor feature in the July 2009 issue of SPIN, on newsstands now.