The Weeds star talks about her role in a new music video -- and shares her favorite artists. 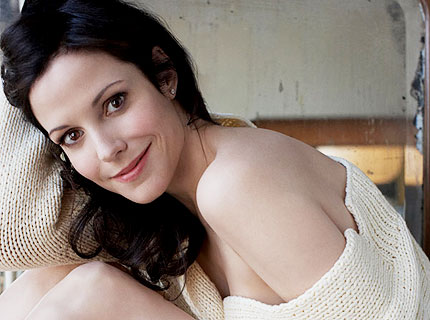 Playing the perpetually troubled, pot dealing mom Nancy Botwin on Showtime’s hit series, Weeds, Mary-Louise Parker manages to exude icy coolness when faced with any number of lose-lose situations: run-ins with gun-toting drug gangs, psychopathic neighbors on speed, and on-the-take DEA agents. But when it came to playing the love interest in a new music video for “Listen to the Darkside,” a song by up-and-coming singer-songwriter Charlie Mars, Parker almost lost her cool.

“At a certain point, like a week before, I hadn’t seen a treatment for the video,” Parker recalls. “They could dress me up like a giraffe. They could ask me to do anything.”

But when she was finally told the concept for Mars’ Danny Clinch-directed, Wizard of Oz-referencing clip, all was well. “Thank God I went, because I love the video and I love the song.” It’s certainly appropriate. With lyrics about getting high and listening to Pink Floyd, Mars’ slinky single is a snug fit for an actress whose character slings dope for a living.

We spoke with Parker about the video — plus, the importance of music on Weeds and some of her favorite artists, including guest star Snoop Dogg.

Were you involved at all with recruiting bands to cover the show’s old theme song, “Little Boxes”?
I got Elvis Costello into it. That was my big point of pride. That was my favorite one. I don’t really have much to do with the other music on the show. But you know Leona Naess?

Yeah, absolutely.
There’s a song we used in Season One, “Ballerina,” that I really wanted. It was really hard to get. Leona really wanted us to do it, but you have no idea how hard it is to get through to the record companies. There’s a lot of red tape over there, you know?

As the seasons go by, is it easier to get better music, thanks to the show’s success?
One would hope. A lot of people are like, “Oh, could you use this song?” And it’s always like, “Oh, we can’t afford it.” Because we have no budget for music, and nothing adds more to the feeling and the vibe of the scene than the music. Sometimes I just wish that we could spring for it a little more.

Let’s talk about this new Charlie Mars video that you’re in. What do you like most about the video?
They wanted it to have this Wizard of Oz type influence, so at the top, I’m walking on this yellow brick road type thing, and then I go by people with these red sparkly shoes on, and then the poppies, so it has that whole kind of feel, like going to another world. I like the way we did that because it was super subtle. And [director] Danny [Clinch], he’s just a really cool person — and just makes everyone feel positive.

He’s one of those photographers who people always want to meet backstage at rock festivals. People love his work.
Charlie said the thing about Danny that’s really great is that he likes what he likes, not what he’s told to like. He picks things and he responds to them. I don’t think he would have done it if he didn’t like the song and he didn’t like Charlie.

Is the song going to be on the show or is it just a stand alone project?
Well, I wish, but I don’t think so. It’s so catchy. With the lyrics, I feel like it should be.

This wasn’t the first time you’d been in a video.
Well, I did a Bonnie Raitt video for “You Got It,” for this movie that I did, Boys On the Side. And then I did this Jayhawks video — Do you know the Jayhawks?

Absolutely.
They’re like my favorite band. I’m friends with both of them — Gary’s a really good friend of mine. And so I ended up in this video that was so bad, it’s almost good. It’s fun to watch because it’s so horrendous. The label wouldn’t let them play it because it was so fucking bad. And now I kinda laugh about it, and Gary laughs about it. I feel kind of responsible for it because I kind of hooked them up with the director, and the director was an awesome person, but I don’t think the concept really worked with the song. And also I was three months pregnant and I hadn’t told anybody, so I had this yellow dress on. It was kinda like, “Is she fat or something?”

The Jayhawks are sort of a beautiful trainwreck. They made amazing music, but had so many bumps in the road — and that’s part of what makes them great.
I think the best record is Sound of Lies — it’s kind of a masterpiece. And they recorded it when they were bummed out. I think it’s so beautiful.

Any other bands you’ve seen that you’re particularly into at the moment?
I’m friends with Josh Ritter; I wrote about him for Esquire. I interviewed him and got to know him. He really has everybody in the palm of his hand. And I saw Rufus Wainwright, who was really great, and his dad too.

Are there any musicians who’ve come up to you and confessed to being fans of Weeds?
Actually, it’s been mostly random people, like someone’s grandmother. But someone told me that Bon Iver’s a fan. And there’s always Snoop Dogg.

He seems like the target audience. Plus, he had a really great cameo on Weeds.
And I gotta say, he was a really lovely fella. He was really nice and had really good manners.