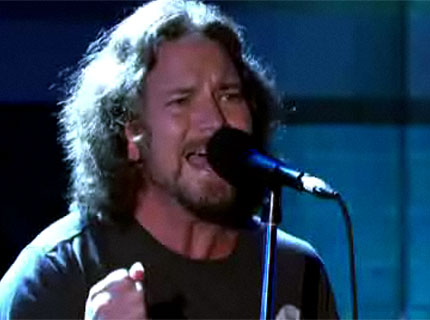 Conan O’Brien made his debut last night as the host of The Tonight Show, replacing Jay Leno after his 17-year tenure. The stars of the show? The towering Irish funnyman, Will Ferrell, and Seattle alt-rock fivesome Pearl Jam, who unveiled “Get Some,” a brand new song off their fall release, Backspacer!

After Conan gave viewers a peep at the album’s cover art (which was designed by This Modern World comic strip artist Tom Tomorrow and features an illustration of a human anatomical model), Pearl Jam surged into new tune “Get Some,” a straight-ahead rocker buttressed with garage punk power chords and a spry solo from rhythm guitarist Stone Gossard. Eddie Vedder wailed the snappy chorus: “Got some if you need it.”

The band’s biggest fanboy? O’Brien. “Launching a show like this takes a lot of hard work and one of the things that has sustained me over the past three months was knowing that at the end of our first show I’d get to watch a performance by one of the greatest rock bands in the world,” the host said as he introduced them.

WATCH: Pearl Jam,”Get Some” Live on The Tonight Show