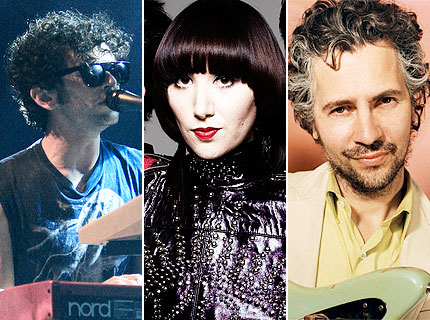 Show of hands: Who here sometimes forgets about phone conversations they’ve had late at night? Fair enough. Okay, now keep your hands up if those “conversations” involved “doing it over the phone” with Karen O. Anyone?

Well, it seems that Flaming Lips frontman Wayne Coyne was so busy dwelling on the hardship of recording his band’s forthcoming album Embryonic, that the fact that MGMT and Yeah Yeah Yeahs frontwoman Karen O also appear on the record just completely slipped his mind.

“People do a lot of collaborations these days,” Coyne explained to blogger Rafaël Zeier, who interviewed Coyne at the Open Air St Gallen Festival in Switzerland. “I forget that we did these collaborations, because sometimes we just do it in moments,” he added.

The way Coyne tells it, MGMT was recording in Malibu and “had the night free,” so the Lips sent them files and “everybody chimed in on it” before sending it back. How very Postal Service.

As for Karen O, her contributions sound a bit saucier: “[The Yeah Yeah Yeahs] were on tour in America and I called her up in a hotel room and we just did it right over the telephone,” Coyne revealed. “It’s pretty absurd.”

And once Coyne started giving credit where it was due, he did remember not to leave out the fact that there would also be some spoken word in the mix, courtesy of a German mathematician (naturally).

“For us, making a double record means that there’s more room to be strange,” Coyne said. “You have to be willing to completely destroy yourself and just see what comes out of the dirt. It’s very stressful because you don’t know if you’re just losing your mind or what. But I think for a group like us, I think we have to lose our minds.”

Coyne also predicted that “If you like the Soft Bulletin, I think you’ll like it. It has a groove to it. We’re not a very groovy band but some of it has a groove.”

To which we say: If ya’all aren’t groovy — with your habitual bubble transportation, psychedelic color scheme, and hand-puppet-crazed fans — then the backgrounds in this new Kanye West video bears no resemblance to that featured in Sonic the Hedgehog.