The Canadian indie-pop quartet work Seattle into a heated frenzy. Find out how they cooled them off. 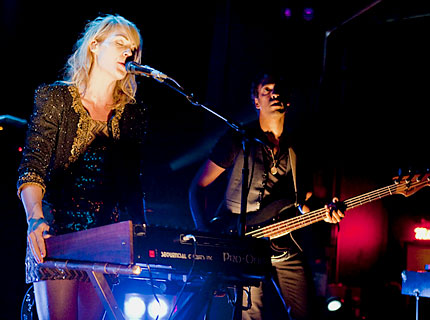 Metric’s new album is called Fantasies, and as frontwoman Emily Haines strutted and spun across the stage at Seattle’s Showbox last night, wearing a tight, gold-sequined dress, heads swivelled like a sprinkler, tracking her across the stage — no doubt engrossed in fantasies of their own.

Opening night of Metric’s 14-date U.S. tour was all things sleek and sexy, whether Haines was positioned behind her synthesizers on the set’s first two songs, “Twilight Galaxy” and “Help I’m Alive,” or stepping out front to dance wildly as her bandmates — guitarist James Shaw, bassist Joshua Winstead, and drummer Joules Scott Key — chugged away at the jagged riffs and slinky grooves that make the electro-popsters’ tunes so engrossing.

The band rarely interacted directly with the fans, but that didn’t matter one bit, as the crowd screamed in delight when the quartet played the menacing “Dead Disco” off 2003’s Old World Underground, Where Are You Now? And later they shrieked when streams of water, built into the band’s stage set, doused the sweat-soaked horde of dancers upfront with a much-needed cooldown.

Their music might focus on relationship woes and the perils and pressure of rock’n’roll fame, but that doesn’t stop Metric from having one hell of a good time onstage. And given the polished performance they delivered on their first stop, more hot nights of fantasy are bound to come.

Encore:
“Monster Hospital”
“Live It Out”