The genre-fusing rocker plays tunes off his October release at Manhattan's intimate Mercury Lounge. Click here for a review! 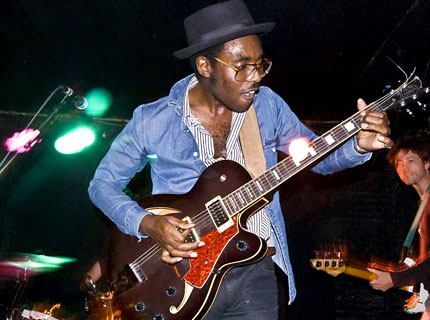 Lightspeed Champion (a.k.a. Devonte Hynes) may have split personality disorder.

The singer-songwriter was all over the place Wednesday night at Manhattan’s Mercury Lounge, exuding a humility (apologizing for slipped riffs) and self-confidence (boasting about writing songs in just days) during his first performance since disappearing into the studio a year ago. The most convincing evidence for prognosis: Hynes’ new songs themselves, which seamlessly moved from piano-infused soul to laid-back country to psychedelic guitar blowouts in seconds.

The set was defined by Hynes’ sudden shifts. With psychedelic Brooklyn band Spacecamp behind him, Hynes transfixed the audience with his vocal hop-scotching, singing in the soulful croon of Marvin Gaye on one song and the quaking lisp of the Cure’s Robert Smith on another.

On new tune “Wipe the Floor,” he belted out “It’s time I made my way home!” over a surf-rock rhythm and minimal organ. On the next tune, “Smooth Day,” he completely changed directions by piling computer-generated drums and soft vocals on top of a R&B riff. But don’t get comfortable — soon the song was blown away by yet another change in direction: a screaming electric guitar duet.

On new tune “Marlene,” Hynes celebrated Thompson Twins-era synths and the guitars of the Clash in the same three minutes. Fittingly, he sang its anthemic couplet, “Everybody knows you want a baby / And God knows everybody wants one, too,” sincerely at first, then vindictively, channeling the anger he displayed in his previous band, dance and punk trio Test Icicles.

On “Middle of the Dark” Hynes put down the guitar and moved to the keyboard to tap out a Baroque melody while lamenting, “Tell me, beauty, is this all we worked for?” Next he stood up, snatched the guitar and sprang into the set’s finest moment: a haunting, extended instrumental jam, seemingly inspired by the long intro to Elton John’s “Funeral For a Friend/Love Lies Bleeding.”

Lightspeed is all over the place — and his new songs are, too. So he should marvel at the fact that they’ve already proven to be such a hit.

Tags: Lightspeed Champion, We Were There