We Are the Fallen premiere new songs in Los Angeles with singer Carly Smithson. Click here for more! 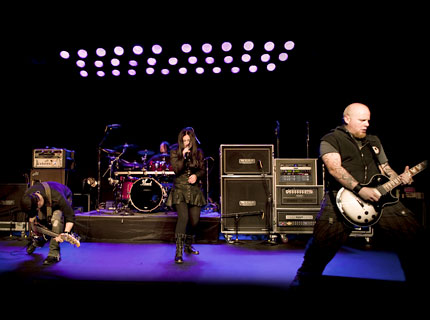 America, meet your new goth rock queen: pale and plangent-voiced ex-American Idol star Carly Smithson, who has joined with three former members of Evanescence — including co-founder/principal songwriter Ben Moody — to form a new band, We Are the Fallen. Hey, say what you want about Moody, at least he has a type — when it comes to frontwomen.

After a 2003 falling out with Evanescence’s raven-haired, iron-fisted singer Amy Lee, Moody, the chief songwriter behind the band’s 15 million-selling Fallen, spent half the decade working with high-profile collaborators including Celine Dion, Avril Lavigne, and American Idol stars Kelly Clarkson and Chris Daughtry. So it’s no surprise that Moody has recruited the hard-rocking Idol fan fave Smithson to front the band.

On Monday, before an invite-only audience of 100 friends and family, press, and record executives, the newly formed outfit played two songs: a cover of Evanescence’s ” Going Under” and new original tune “Bury Me Alive,” which is currently available as a free download at wearethefallen.com.

Evanescence fans will find much to like in the new song, with Moody and company relying on bone-chipping power chords, Cro-Magnon drums, and huge hooks. And Smithson — dressed like a guest at a funeral for a character from Twilight in black boots, lace tights, skirt, jacket, and midnight blue eye shadow — neatly fit the aesthetic, belting gloomy lyrics about self-destruction on “Bury Me Alive,” a heavy, atmospheric rocker spiked with Moody’s deafening guitar pyrotechnics.

Ex-Evanescence axeman John Lecompt and drummer Rocky Gray joined with new bassist Marty O’Brien in a rumbling rhythm section that surged to a chaotic chorus as Smithson lamented a lover and the “nightmare you’ve become.” “I’ve watched you die / It’s too late to save you this time / You’ve buried me alive,” she howled.

Before the performance, Moody explained how Smithson joined the band: “We didn’t want a singer to just hit the high notes, we wanted someoneto be part of our family. From watching her sing, I knew she had charisma…. even if I’venever seen American Idol. She’s friends with my roommate, andone night we spent four and a half hours in the middle of the nighttalking about music and shows. Afterwards, I called up the guys and wemade some changes.”

Visibly flattered, the 2008 sixth place Idol finisher added: “I thought it was rad!”

The group is currently label-less and has no idea when the debut will drop. But they plan to release one song per month for digital purchase, while touring.

Jeff Weiss
Tags: Carly Smithson, Evanescence, We Are the Fallen, We Were There