Plus: The cone-hatted new wavers are also courting Justice and Fatboy Slim. Click here for details! 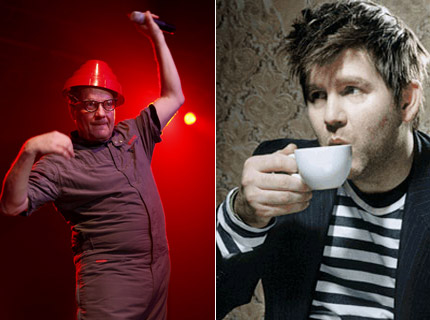 Devo have recruited LCD Soundsystem’s James Murphy to collaborate on their new album. How did the two come together? Well, it starts with a big misunderstanding.

“[Devo co-founder] Gerald [Casale] had said we were searching for people like James [Murphy] to work with, which somehow turned into him helming the entire album,” Devo mastermind Mark Mothersbaugh told the LA Times of the rumors that that the band were working with the LCD Soundsystem mastermind. “It was a total misquote. But when we contacted him to apologize for the misunderstanding, he said he’d love to work with us.”

And apparently Murphy isn’t the only one who wants a piece of the reunited “Whip It” crew: “We played a Japanese festival recently between Justice and Fatboy Slim, both of whom said they’d like to work with us too,” Mothersbaugh revealed.

As far as the sound of the album goes, Mothersbaugh has painted the new project as a return-to-form — at least for half of the record. “Six or eight of [the songs sound] like they could fit into one of our first few albums. We even used the same instruments,” he said. “I’m looking for some outside mixers and producers that might want to have fun with a Devo song — I would want them to be as deconstructive or reconstructive as they want to be.”