The notorious rocker ditches her solo project and preps a new release under her old band's name. Plus: she's still totally nuts! 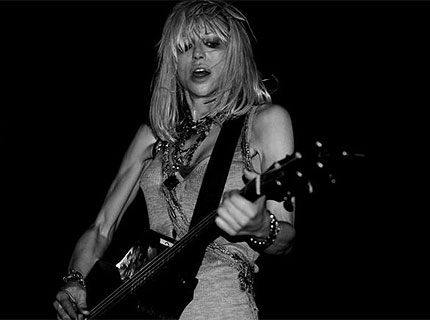 Courtney Love’s next album, Nobody’s Daughter, has been more than five years in the making. In those years, meetings of the musical minds have transpired between Love and Smashing Pumpkins’ Billy Corgan — as well as renowned songwriter/producer Linda Perry — and yet, no album has been released.

To be fair, in the time that’s passed since Love first started talking about the album, she’s been busy with life’s day-to-day things — like dealing with the emotional fallout of having Kurt Cobain’s ashes stolen, taking credit for Britney Spears’ public meltdown techniques, declaring war on Cobain’s estate robbers, and, most recently, getting sued by American Express.

But it seems as if all that is finally taking a backseat to Love’s musical ambitions — and, get this: She’s decided to get her old band Hole back together.

Well, kinda. It’s sorta her new band Hole — because the only original Hole members in the project are Love and Hole bassist Melissa auf der Mauer, who is returning for background vocals. Love has also recruited heavy-metal string quartet Apocalyptica and guitarist Micko Larkin, who joined her in a recent video chat with NME in the studio.

The conversation is typically all over the map: Flanked by a creepy crew of dolls, Love flits from talk of Kermit the Frog to Charlie Chaplin, to strip joints and Mike Tyson. But somewhere in all that free association, Love does squeeze a few details about the new release in: While the record was originally planned in the vein of Bob Dylan’s Blood on the Tracks, it is now modeled in the tradition of David Bowie’s Diamond Dogs. Ambitious, ambitious.