Angry ruffians know exactly where their next meal is coming from. 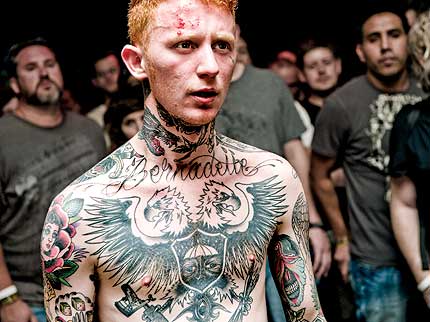 The five mad young men in Gallows have beef with Mickey Mouse. “He hates us,” says wiry, heavily tattooed lead snarler Frank Carter, 25, speaking on the phone from the home he shares with his mother in the English town of Hemel Hempstead. “The day before a show at the House of Blues in Disneyland, we got a call saying Disney wouldn’t let us play because our lyrics were offensive. I imagine they had a problem with ‘I don’t want you passing out / I want you sucking my dick.’ ” (Relax, it’s the anti-date-rape title track of their 2006 Epitaph debut, Orchestra of Wolves.) The band members weren’t bummed about the canceled gig. “For us,” says Carter, “being banned was like getting a gold star.”

In the four years that Carter, his brother and guitarist Stephen, 23, bassist Stuart Gili-Ross, 28, guitarist Laurent Barnard, 28, and drummer Lee Barratt, 25, have spent touring the world and spilling blood (the combative Carter is a walking wound), they’ve found plenty to get riled up about. “Everywhere you go, the economy is fucked,” Carter spits. “Religion tortures people, kids are having babies, war is a constant, and most music is trite shit.”

While the faint-hearted might consider Gallows’ music troubling, few would dare call it trite. The new Grey Britain, the first fruit of a two-album, $1.5 million deal with Warner Bros., is a splenetic howl, raging against religion (“Crucifucks”), casual violence (“I Dread the Night”), and public apathy (“Leeches”) in homage to the holy Blacks: Flag and Sabbath. This summer they’ll unleash their screeds on the Warped masses. “I want our music to bother people,” admits Carter, also a tattoo artist, “because if people get mad, it means they’ve opened their eyes. We say things other bands don’t have the balls to say.”

But there is one target Gallows avoids. “I won’t attack Warner Bros.,” says Carter. “They gave us a million pounds to make music that will inspire a generation to see how irrelevant most major-label acts are. It’s perfect.” Also, he continues pragmatically, “they pay for my food.”