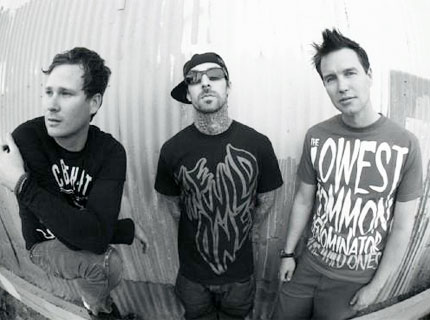 When SPIN.com caught up with Mark Hoppus recently, the Blink-182 bassist/vocalist said the reunited band plans to play new material on their star-studded summer tour. And now drummer Travis Barker has come forward to detail the new songs — which, he says, are “heavy”!

According to Barker, Blink has four demos in progress — one of which is “nearly complete” and will be road-tested on the summer outing [via MTV.com].

That new song is called “Up All Night,” and Barker described it as “a logical step” from where the band left off [with their self-titled 2003 album]. “In the case of ‘Up All Night,’ it feels like it could’ve been on the last record, or right where the last one left off. It’s kind of heavy, if you mixed Box Car Racer and Blink. It all makes sense. The pieces are all together.”

“I’ll have the studio out on tour with me, and I think Mark will too,” Barker added, referencing the recording of the band’s much-awaited reunion album. “I wanna work on it while we’re on tour. But that’s just me. I’m taking it day-by-day. Loving life. Working.”

And for those worried about the motivation for the band’s reunion, Hoppus is ready to assuage any doubts: “I hate when bands get back together and do one tour and it feels like they’re going to make a bunch of money, and then they go away for awhile and then come back again,” he told San Diego’s Union-Tribune last week. “We did this [reunion] to continue being creative and having fun. I see us continuing to tour and put out albums as long as it’s fun. There’s no end game and no plan at all. We enjoy playing music together, that’s all.”