The trio are joined by rapper Nas, debut a new song, and completely fuck up a classic. Click here for a review! 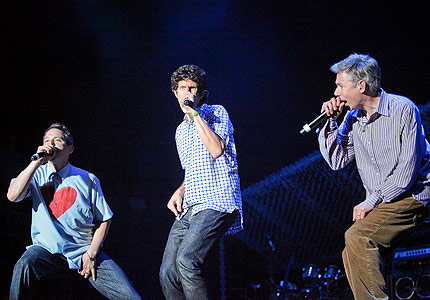 There are three things you need to know about Beastie Boys’ set at Bonnaroo Friday night:

2. They spent 60 percent of the show playing their instruments.

3. The Boys played many of their hits, from “Paul Revere” to “Intergalactic,” to varying result — surprisingly good, sorta bad, and completely, utterly, and embarrassingly ugly.

The 90-minute show was like a steamy romance with a co-worker — it started great and ended in disaster.

With Mix Master Mike in a light-adorned booth, splicing Rage Against the Machine with older ’60s soul jams, the rabble-rousing New Yawkers took the stage — Ad-Rock and Mike D bouncing, and MCA in his cool saunter, lookin’ like Thurston Moore in cords and a long-sleeve button-up. They snatched up their instruments and kicked into the show’s best moment: fast and fuzzy punker “Time for Livin'” with Ad-Rock on the mic screaming uncontrollably in his obnoxious squeal. It was a loogie in the face — a very warmly welcomed one.

Now in their mid-40s, the Beasties seem more comfortable with their instruments than with criss-crossing the stage, rapping, and throwing their hands in the air like the 22-year-old hip-hop brats that made “Beastie Boys” a household name. The same applies to their new track with Nas, who, when introduced, was met with a scream some 15,000 strong.

Musically, the song is excellent; the boys call out the overabundance of shitty rappers and give props to “real emcees” as a trunk-rattling beat rolls by like a Caddy down Brooklyn’s Fulton Street. MCA, graying and looking like he was in need of a break from the thick-as-butter air (really, dude, what’s with all the clothes? It’s 90 degrees out!), walked aimlessly onstage, as Nas — in all black clothes, shades, and a ball cap — dropped rhymes between the three. Best lyric: “These rappers are rappin’ like crap / They crappers!” spit Ad-Rock. Touché!

When the Boys returned to the instruments, the performance was intoxicating and convincing. A jazzy, jammy rendition of “Sabrosa,” the best track off their obscure 1996 instrumental album The In Sound From the Way Out, was spot-on and tight, and placated the Phish fans nudging for prime real estate in the pit for the jam band’s 11 P.M. set time. Ad-Rock looked at home behind his electric guitar on the riotous, head-banging “Heart Attack Man,” with MCA anchoring his unhinged, ADD behavior with a calm facial demeanor. “Remote Control,” another tune with the guys on their instruments, was one of set’s best. Mike D stepped out from behind the drums, took the mic and spit his ode to robotic rule, pausing to mimic the computerized sounds — “EEEEEEHHHHHH AAAAAHHHHHHHHE EWWWWWWAHHHHAH!!! — with the crowd.

Which brings us to the completely, utterly, and embarrassingly ugly. Maybe they were tired, maybe they just haven’t practiced the song, but either way, the Boys’ take on the set closing “Sabotage” was cringe-worthy. Ad-Rock remarked on the first slip up — “see people, no iPods and no backing tracks, this is real live music” — but later when lyrics were jumbled, Mike D missed a drum beat, and MCA flubbed his bass line, causing the music to grind to a halt… the crowd was awkwardly silent. It was an obvious fuck up. The Boys looked at each other confusedly — and many in the crowd turned to each other and wondered if they could even finish the song. They did — revving it up to close out the show before walking offstage… briskly.

The Beastie Boys are still fresh and, as they showed with a few select rarities and classics, so is their prowess. They’re still the Beastie Boys, but much less “boys” than — gasp! — men. Men who have kids, wives, homes, and instruments — men who don’t rock house parties or drink Hurricane Ice 40-oz.-ers… but throw Obama fundraisers and sip Stella Artois… Hell, Ad-Rock had a bottle with him onstage.