Longtime friends trade in their dysfunctional punk past for a prettier noise-pop present. 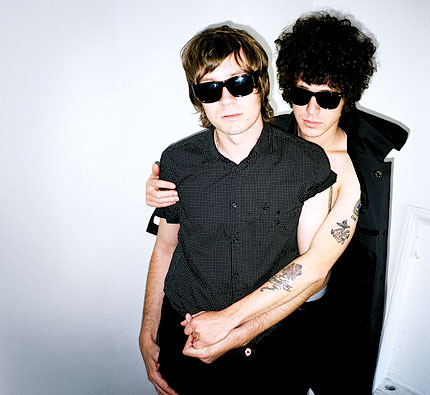 “If you live there, then you slowly die.” That’s how Brandon Welchez, frontman and beat programmer for drone-pop duo Crocodiles, describes his band’s hometown of San Diego. “A lot of the nastiness in our music comes from reacting to the boring culture there, and the sunshine,” adds guitarist Charles Rowell. “The sunshine can be oppressive.”

Anger has played a part in the musical history shared by Rowell, 26, and Welchez, 27, ever since they met at a local punk scene anti-fascist meeting ten years ago. “I was getting anti-Semitic notes in my locker, with drawings of me hanging,” says Welchez. The pair became best friends, slogging their way through a succession of iconoclastic racket-makers until dysfunctional member relations and the death of a bandmate forced them into duo status. They found themselves writing prettier, yet still disturbing, ditties. “We love oldies, girl groups, and ’60s music,” Rowell says. “Put that through a massive wave of distortion and you get what we are.”

After their pals in No Age listed their single “Neon Jesus” among their top ten songs of 2008 on Stereogum, the buzz began. But Welchez insists he and Rowell didn’t court the attention. “We didn’t have a goal of being some fuckin’ hot ‘Internet sensation,’ ” he says. “That shit’s corny.” That’s why both worked day jobs (Rowell at a bakery, Welchez as a substitute teacher at a school for autistic children) while recording Summer of Hate, finishing their debut exactly to their specifications well before any label release was even considered. “Freedom is so important to us,” Welchez says. “We don’t want any fuckin’ chains.”