Tori will answer anything about cereal, keytars, and women who play piano. But don't call her "Myra." 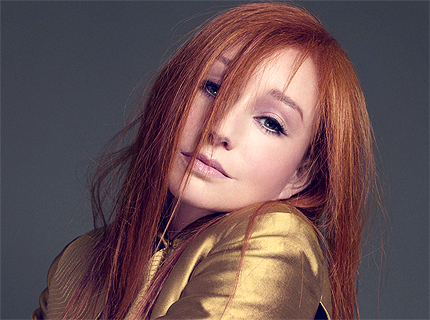 Seventeen years after achieving instant diva status with her landmark debut album, Little Earthquakes, Tori Amos still doesn’t care if you like her. “Lionesses, we’re not cuddly,” she says. “You don’t look at us and say, ‘Oh, what a nice puddy tat.'” Born Myra Ellen Amos — not coincidentally under a Leo sign — the fiery 45-year-old pianist has nonetheless inspired a cult of rabidly devoted female fans with her haunting compositions and brazen confessional lyrics, which are further on display on her tenth studio album, Abnormally Attracted to Sin. On a recent morning, we spoke to Amos in her posh hotel suite in midtown Manhattan.

Do you mind if I call you Myra?
Not if you want to be friends. Tori’s my legal name. My niece and nephews, they all call me Aunt Ellen, because I went by my middle name years ago, before I turned 18.

I take it you don’t like your given name?
No. Would you? It’s just bad. Come on! And wasn’t Myra Hindley the worst serial killer that’s ever lived? She killed children. My God.

You’re often compared to Kate Bush. Does that annoy you?
Well, you’re going to be compared to somebody. I could have been compared to somebody I don’t like. So it’s kind of good if you look at it in those terms. After a while, though, you realize that a whole slew of young singer-songwriter piano players are getting compared to you. That’s when you feel the passage of time is occurring.

Like who, Vanessa Carlton?
I don’t know. There are so many. But a side of me thinks, “Wow, that’s a positive thing.” Because I remember being told this whole woman-at-the-piano thing was dead after Tapestry.

Have you ever rocked a keytar, Tori?
No, but in the ’80s, I remember entertaining the idea. Billy Idol was looking for a keyboard player, and I was really thinking about getting the gig. But then I got signed by Atlantic. So my big moment passed by.

Was that before or after you starred in the Kellogg’s Just Right commercial?
[Laughs] I made $12,000. That’s why I did it.

That ad is on YouTube. It’s pretty painful to watch.
I know. And they cut my hair. But you know who else was up for that? Sarah Jessica Parker. I beat her.

Nice. One of your biggest hits is “Cornflake Girl.” What’s up with you and cereal?
Well, I have a lot of food references in my work. But the lyric is “Never was a cornflake girl.” Which is important.

So, in reference to your new album’s title, are you abnormally attracted to anything other than sin?
Good wine. But not in the morning.

That doesn’t sound so abnormal.
No. But there’s this thing I have with the crew. You know how it’s in the contracts with certain artists who have just been through AA — I’m not mentioning names — that the crew and musicians have to [abstain from drinking] while on tour? Mine is sort of the opposite.

You actually require people to drink?
Well, not exactly. But on my tour bus, it’s not good if you’re an AA person. I carry a wine cellar on the road, and I just don’t think it’s good if somebody can’t be around a super Tuscan. I am the worst influence. If you can’t handle your vices, then I am the Devil.

What about your eight-year-old daughter, Natashya? Isn’t she on the bus?
Yeah, she comes with me. She likes champagne. She doesn’t get to drink it, but sometimes she’ll get a little sip.

On a recent tour, you threw your shoes at a security guard. What hijinks can we expect this time?
I don’t know what’s going to happen before it happens. You have to gauge, “Are people trying to wind me up?” Sometimes there’s no win, so I’ll try to avoid certain confrontations with the audience. Some things, however, are unstoppable, and it’s happening before I know it.

Like when?
There were some girls who were given front-row seats as a courtesy and then were incredibly rude. One was on the phone, and even I could hear her — I mean, it was during a ballad. And I saw that everybody around her was being held hostage. You just think, “You’ve got to get taught a lesson.” So I said, “Get the fuck out of my show.”

Ouch. Do you at least sympathize with the guy who’s only at your show because his girlfriend has dragged him there?
No. I just think, “I’m gonna get you laid tonight, buddy. You’ve gotta thank me.”